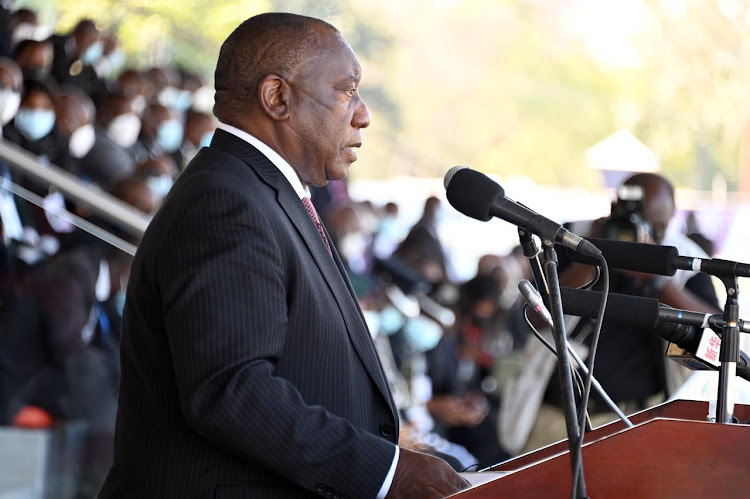 President Cyril Ramaphosa has described the late former Zambian president Kenneth Kaunda as a “loyal friend” of SA who stood by the country during its liberation struggle.

In his tribute to the former statesman, Ramaphosa said that during the height of apartheid, Kaunda, who was laid to rest on Friday, “provided us with material and moral support, and gave refuge to our leaders”.

“Even as the brutal apartheid regime sought to wreak havoc in the front-line states in its efforts to destroy the liberation movement, Dr Kaunda stood firm and never wavered in his support for the people of SA and the region.

“Zambia provided us with material and moral support, and gave refuge to our leaders. SA is grateful we could acknowledge Dr Kaunda’s great role in our struggle for freedom during his lifetime.”

Ramaphosa was among the foreign dignitaries who attended Kaunda’s funeral in Lusaka on Friday. The 97-year-old died in hospital from pneumonia last month.

Describing him as a “man for all seasons”, Ramaphosa said Kaunda not only had empathy but he led with humility and selflessness, and walked among the people. He was a pan-Africanist who worked to advance African unity and integration.

“He refused to surround himself with the trappings of power and influence. He was a man of extraordinary empathy. He was often moved to tears of compassion against injustice.”

Ramaphosa said that even after leaving office, Kaunda continued to play an important role in national life, advocating for important causes like HIV/Aids, peace and conflict resolution. But most of all his passion for young people was outstanding.

The family of the late first president of Zambia Kenneth Kaunda feels strong-armed in having to agree with the country’s government to bury the ...
News
2 months ago

“He wrote of how being among youth always filled him with humility and respect. He called on Africa’s youth to work hard, to reject lives of idleness and vice, and to be part of nation-building, saying: ‘The fate of this country is in their hands.’ He was a champion of African self-reliance.

“We draw strength and inspiration for this now more than ever, as we find ourselves in the grip of a deadly pandemic. He would be proud to see us working together to bring a recovery to our continent that is rooted in compassion and human dignity.”

In 2002, Kaunda was bestowed with one of SA's highest national orders, The Order of the Companions of OR Tambo in Gold.

Ramaphosa said Kaunda was one of the last surviving leaders of the generation “who lit the path to Africa’s freedom from colonial misrule”.

“He has left us, but we know that what he stood for, the standard of leadership he set, and his progressive ideals, live on. He has left a Zambia proud and free. He has left an Africa united and strong,” he said.

“He is not going, he can’t. That will give them a chance to arrest him on the way,” said a family elder who asked not to be identified.
Politics
2 months ago

Kenneth Kaunda: The last giant of an African era

Kenneth Kaunda, who died in Lusaka this week at the age of 97, once said it was his wish for Zambians to have an egg on their table for breakfast ...
Opinion & Analysis
3 months ago