'Let's be clear ... we will not tolerate acts of criminality': Ramaphosa on violent protests

Violent protests kicked off around Gauteng on July 11 2021 resulting in torched vehicles, burnt buildings and clashes with police.

You might be angry and hurt, President Cyril Ramaphosa said, but turning those emotions into “increasingly violent” protests was simply unacceptable.

While Ramaphosa uttered these words on Sunday night during his address to the nation, there were reports of widespread looting across Durban and Johannesburg, with police involved in running battles with protesters.

Police feared that the protests would continue into the night.

Ramaphosa directly addressed the violence during his address, saying that the country “will not tolerate acts of criminality”.

“In the past few days, we have seen sporadic but increasingly violent protests in some parts of the country. Key infrastructure like national roads have been affected, slowing down the transportation of goods and services that keep our economy running. Property has been destroyed. Cars have been stoned. People have been intimidated and threatened, and some have even been hurt. These acts are endangering lives and damaging our efforts to rebuild the economy.

“Our constitution guarantees everyone’s right to freely express themselves and to engage in peaceful protest. While there are those who may be hurt and angry at this moment, there can never be any justification for such violent, destructive and disruptive actions,” he said. 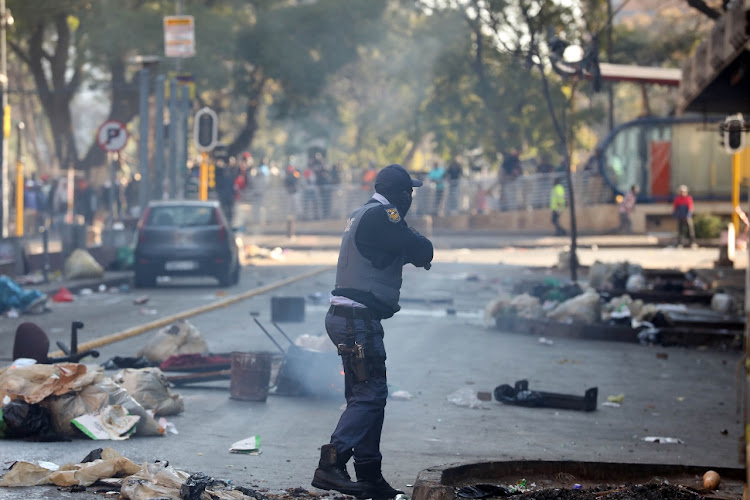 A police officer stands in a debris-strewn Jules Street in Malvern, Johannesburg, on Sunday. Protests that started in KwaZulu-Natal following the imprisonment of former president Jacob Zuma moved to Gauteng late on Saturday night and continued into Sunday.
Image: Veli Nhlapo

Violent riots erupted in Jeppestown and other parts of Johannesburg on Sunday.
News
10 months ago

It was particularly worrying, he said, that some of the violence was “based on ethnic mobilisation”.

“Since the advent of democracy, institutions like the Constitutional Court have been at the forefront of improving the lives of South Africans.

“Let us be clear, as a nation, that we will not tolerate acts of criminality. Those who are involved in acts of violence will be arrested and prosecuted. Those found guilty of breaking the lockdown regulations will receive the stipulated penalty. This will be done without fear or favour,” Ramaphosa said.

Police reported on Sunday morning that about 70 arrests have been made since Saturday linked to the protest action. An update on the situation hadn't yet been provided by Sunday night.

"Conservative estimates" are that the damage to private and public property in the province is at approximately R100m, but this could increase as ...
Politics
10 months ago

Agri SA says citrus worth R15m on its way to Durban harbour for export was destroyed in protests on Friday by people calling for Jacob Zuma's release ...
News
10 months ago

What we are witnessing is not a popular uprising. It is not a sudden outpouring of rage by the "long-suffering masses" demanding the release of "the ...
Opinion & Analysis
10 months ago