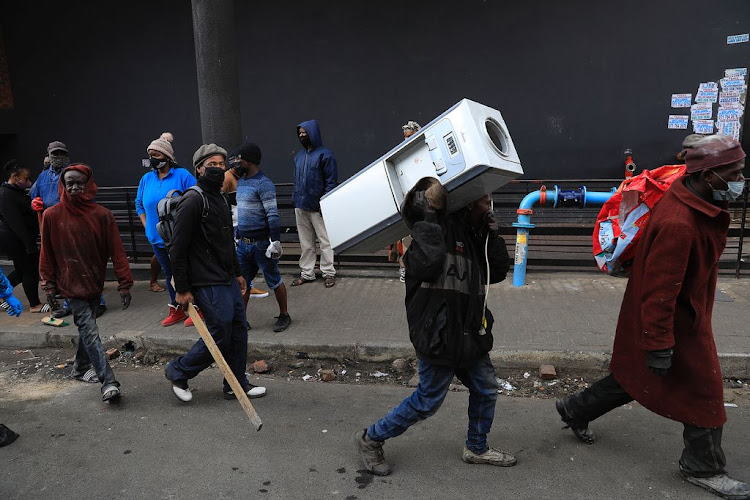 SELF SERVICE Days of looting and violence in Gauteng and KawZulu-Natal have caused billions of rand in damage, as an estimated 200 shopping malls where affected.
Image: Alon Skuy/ Sunday Times

The masterminds behind the violent uprisings in parts of KwaZulu-Natal and Gauteng last week could face terrorism charges.

The National Prosecuting Authority (NPA) has told parliament that it would not hesitate to prosecute those who instigated the looting of shopping malls and destruction of infrastructure under the Protection of Constitutional Democracy against Terrorist and Related Activities Act, a terrorism law.

Justice minister Ronald Lamola also indicated that the violent acts of burning of national key installations, disruptions of economic activities, blockading of national roads — leading to disruptions of key supplies such as food and medicine with dire consequences for thousands of people — could fall within the parameters of the act.

“This act of parliament is one of the critical pieces of legislation designed for the protection of our constitutional democracy.

“Law-enforcement agencies have to investigate all those who violated the spirit and letter of the act, and the other laws of the republic,” said Lamola.

He was addressing the National Assembly's portfolio committee on justice and correctional services about processes to be followed regarding the arrest and prosecution of people involved in recent violent acts and looting in parts of KZN and Gauteng.

Lamola said their analysis revealed that last week's unrest and incidents of violence were occasioned by a confluence of issues.

Rodney de Kock, the deputy national director of public prosecutions responsible for national prosecution services, said the NPA, working with the police, had divided cases into four categories. This started from low-level perpetrators, who included individual looters and people who participated in stealing from shops, to people found in possession of stolen property.

De Kock says justifiable cases from the two categories may result in restorative justice or alternative measures such as admission of guilt fines, diversions or plea agreements as a means of finalising them.

Of groups and individuals who stole property in big quantities, or who organised or planned action, De Kock said these were likely to be crime syndicates who seized an opportunity to commit crime for profits. If found to be syndicates, they will be charged with racketeering and may face life in prison.

Their cases would be overseen by senior prosecutors and this work fell within the organised-crime component.

“These colleagues are particularly trained and skilled to deal with organised crime, and this category of the work is clearly organised crime,” said De Kock. “So we must not be afraid to call it out for what it is. It is crime, it is organised, and if we find that syndicates have been in operation here, we will charge people with racketeering. As we know, people can get life imprisonment for this kind of offence.”

He said that for those who incited public violence, where there was evidence that justifies it, their offences may fall within the Protection of Constitutional Democracy Against Terrorist and Related Activities Act.

“Where we see that there is evidence that justifies prosecutions in terms of these provisions, the state will not hesitate to prosecute,” he said.

The act provides for measures to prevent, combat and investigate in respect of terrorist and related activities. It also provides for a mechanism to comply with United Nations Security Council Resolutions, which are binding on member states.

Meanwhile, from a correctional services perspective, Lamola said they were required to reconfigure a remand detention system that was already overburdened.

He said they had received a high number of remand detainees in KwaZulu-Natal and Gauteng as a result of arrests made for recent criminal acts and violence.

“Our facilities are stretched due to overcrowding; our challenges are also worsened by the Covid-19 pandemic,” said Lamola.

MPs heard that, as of Tuesday, 1,959 people were behind bars, with 806 cases enrolled in court.

Lamola assured them that no-one who took part in the acts of criminality would evade justice.

“Our institutions are working together to expedite all matters before them, justice will take its course and the rule of law will reign supreme,” he said.

The violent protests and looting that broke out in the wake of former president Jacob Zuma's incarceration has cost the KwaZulu-Natal economy R20bn.
Politics
2 months ago

Authorities are busy recovering a mountain of stolen goods after last week's looting spree in KZN and Gauteng.
News
2 months ago

Parliament is further expected to summons security cluster ministers to account for intelligence failures during the looting spree and perceived ...
Politics
2 months ago