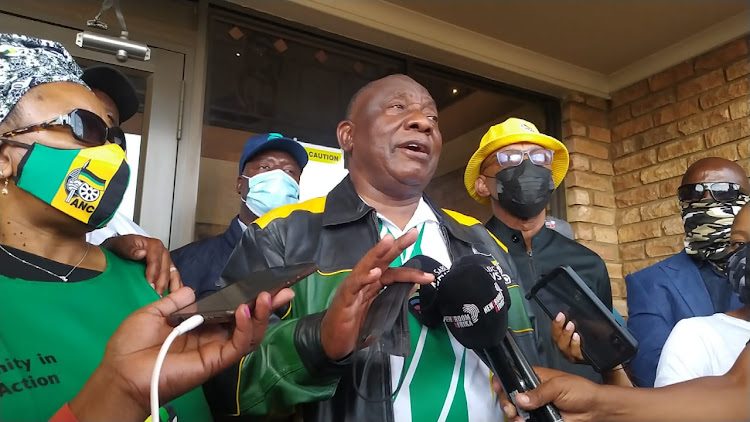 Despicable. That is how ANC president Cyril Ramaphosa described the DA’s local government election campaign posters in Phoenix, which he said sought to cause racial divisions in the country.

“For me it is despicable that a political party that claims to uphold the values of the constitution to have descended to that level of dividing the people of SA,” said Ramaphosa on Friday.

Speaking on the sidelines of an election campaign at the Willows Garden Hotel in Potchefstroom, North West, Ramaphosa answered questions regarding the controversial election poster the DA had placed on street poles in Phoenix, KwaZulu-Natal.

TimesLIVE reported on Thursday that the opposition party came under fire this week after it emerged the posters were viewed as racially insensitive.

The posters, which read “The ANC called you racist. The DA calls you heroes”, were placed in the predominantly Indian community where scores of black people were killed during the July unrest and looting.

A pathetic non-apology from the DA for callous race-baiting posters it put up in Phoenix tells us as much about the party as the despicable posters ...
Opinion & Analysis
3 months ago

The opposition’s KZN chairperson Dean Macpherson apologised on Thursday, saying the party was in the process of removing the posters which “inadvertently caused offence”.

Ramaphosa said: “It is despicable that a political party during an election campaign can feel so threatened that it can resort to racist tactics, but the worst part is when they try to fan the flames of divisions in our nation, of racism and instilling fear in the minds of our people.”

The ANC had sought to unite the nation at all times, he said, “even when we go through huge challenges because the issue of race is a fault line and we always try to close that fault line and appeal to the unity and work for the unity of our people”.

The ANC, he said, was committed to the diversity of the people and “would never as a political organisation try to divide the people of SA along racial lines”.

ANC President Cyril Ramaphosa has hit out at the DA describing their poster scandal as, "dispicable... It is sad that a political party can be so threatened that they would resort to racist tactics and fan the flames of division." @TimesLIVE @SundayTimesZA pic.twitter.com/RUh70hsqPy

Ramaphosa said from 1912, when the organisation was formed, the ANC has always stood for uniting the people of SA right across language, race, cultural and regional affiliations.

“As South Africans we want to be united. Even when we face challenges like those we faced in July, leaders of political parties must work to unite the people of SA and not put up posters that are going to fan the flames of racism.

“It is even worse when a poster is put up where people who might have been involved in the terrible disaster that befell our people in KwaZulu-Natal are called heroes.”

Water, homes and jobs. This is what 60-year-old Marie Abrahams from Promosa in the Tlokwe area demanded from ANC president Cyril Ramaphosa when she ...
Politics
3 months ago

The DA's decision to remove its "racist vs heroes" campaign posters will not shield the party from the consequences of its divisive messaging, says ...
Politics
3 months ago

'When we lost our way, you took us to task,' Ramaphosa tells Tutu on his 90th