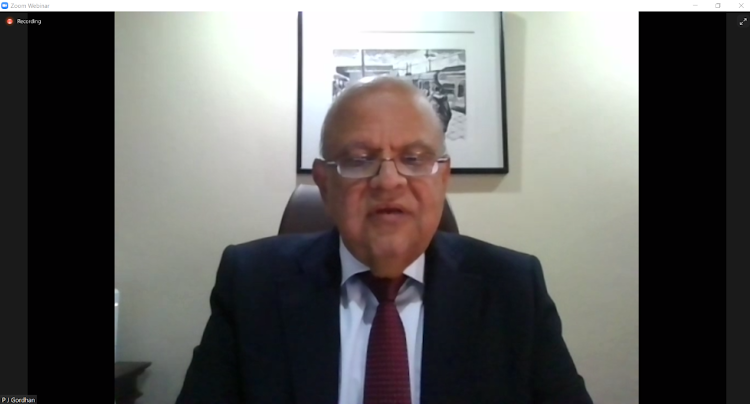 Public enterprises minister Pravin Gordhan had to repeatedly tell MPs that the R131bn UN energy deal agreed upon at COP26 two weeks ago will not be used to clear Eskom's debt.

Gordhan explained three times on Wednesday afternoon that the offer had nothing to do with Eskom debt, but was meant to finance SA's efforts for a just transition in support of the global battle against climate change.

“This finance is not for the debt of Eskom, this finance is for the transition itself that was announced between several developed countries and our president [Cyril Ramaphosa] at the beginning of COP26,” said Gordhan.

He said the funding was still only an offer from the developed countries, and there was no deal as yet.

“Negotiations will now take place at the technical level to appreciate whether these offers will be compatible with SA's financial requirements and capability,” he said.

Gordhan was answering MPs' questions in the National Assembly.

Early this month, the governments of France, Germany, the United Kingdom and the US, along with the European Union, announced a just energy transition partnership to support SA's decarbonisation efforts.

They said the partnership aimed to accelerate the decarbonisation of SA's economy, with a focus on the electricity system, to help it achieve the ambitious goals set out in its updated Nationally Determined Contribution emissions goals.

The countries committed an initial commitment of $8.5bn [R131bn] for the first phase of financing, through various mechanisms including grants, concessional loans and investments and risk sharing instruments, including to mobilise the private sector.

Gordhan said the money was not linked to any turnaround strategy but was for the three projects that the government put forward for funding — the just energy project at Eskom, green hydrogen production and the production of electric vehicles.

He said SA, through a cabinet decision, presented its nationally determined contribution, which was one of the matters that COP26 had to entertain, to establish by what temperature global warming can be reduced and whether the target of a 1.5 degree increase in temperature compared to the pre-industrial stage would be met.

Another issue which was sharply debated at the Glasgow event was who would finance the transition, said Gordhan.

“In SA's case, 41% of our emissions come from electricity production and therefore on one hand, we've got to prepare for the transitioning of Eskom and other such facilities that we have at national level to a more climate friendly and decarbonised state but, equally importantly, the other sectors of the economy that would be affected as well.

“SA put forward three projects for consideration by those who would be interested in financing the transition which in the main has to be the developed countries,” he said.

Gordhan said various proposals were being considered in terms of dealing with the Eskom debt and among the role players that have to take part in this process will be the government, the PIC which holds the bonds issued by Eskom, and there could be other players including the restructured Eskom.

The National Treasury did not announce any provision for Eskom at last week's medium- term budget policy statement.

Legal challenge to SA's plans to ramp up coal-fired power

Civil society groups filed a case this week on the grounds that the new power would pose “significant unjustifiable threats to constitutional rights” ...
News
2 weeks ago

If countries don’t start acting with a sense of urgency on climate change, there will be zero net-zero
Science
2 weeks ago

Envoys echo President Cyril Ramaphosa in hailing partnership as a 'model of support for climate action from developed to developing countries'.
Opinion & Analysis
2 weeks ago