Decline in quality of ANC membership is behind electoral collapse, says Mbeki 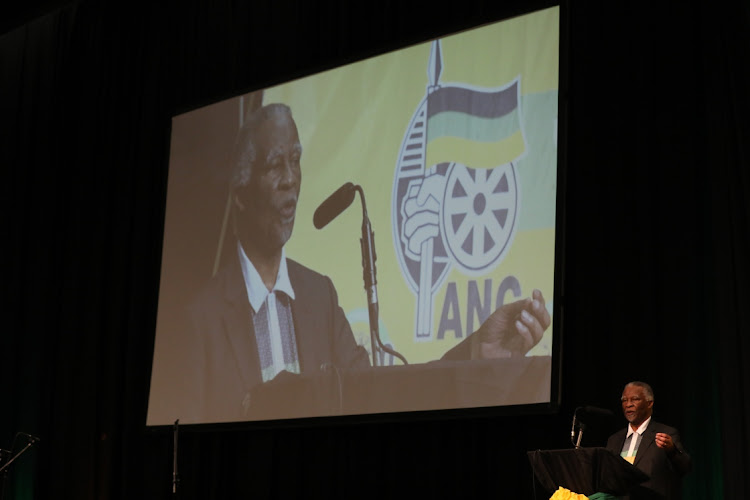 Thabo Mbeki campaigns for the ANC by speaking to business representatives at Durban International Convention Centre ahead of the local government elections on November 1 2021.
Image: Sandile Ndlovu

Former president Thabo Mbeki has attributed the ANC's sustained electoral losses to what he called a degradation in the quality of the membership of the ANC.

Delivering the Chief Albert Luthuli memorial lecture on Friday night, Mbeki tracked the ANC's electoral losses from 2014, when the party was at its peak under his presidency, to last month's local government elections.

On November 1, the ANC won only two metros outright: Buffalo City in the Eastern Cape and Mangaung in the Free State. It runs Nelson Mandela Bay and eThekwini via coalition governments.

In Gauteng, the party failed to win any municipality with an outright majority, making the result its worst performance in the province.

Mbeki said: “The continuous degradation in the quality of the membership of the ANC, emphasised at all ANC conferences for the two decades between 1997 and 2017, contributed directly to this sustained loss of electoral support by the ANC.

“We must add to this the important matter of what has happened to the standard of living and quality of life of the people, especially the working masses, especially given that the ANC has campaigned on the promise of ‘a better life for all’ in all the elections since 1994.”

He said for many years, with the ANC as the governing party, the country has seen a stubbornly high and increasing level of unemployment that mainly affects the working people who should benefit most from democratic rule.

High unemployment figures speak of a stagnating economy incapable of creating jobs, he said, urging the ANC to urgently do everything possible to effect its renewal.

He called on the party to act without delay to ensure there is a sustained effort to achieve high economic growth rates and sustained development of the economy “and to contribute everything we can to the renaissance of Africa”.

He added: “Naturally, the matter of the renewal of the ANC is fully the responsibility of this organisation of Chief Luthuli, which must implement what is after all a directive issuing from its 54th national conference. Because it is the governing party, the ANC owes the whole country this renewal.

We must have an aversion to normal, or we become enablers of misgovernance

If we want to see politicians become our servants, as they ought to be, we must organise protests and interrupt their normal lives, writes Makhudu ...
Opinion & Analysis
5 months ago

TOM EATON | If Ramaphosa’s playing a long game, he’s playing it all by himself

As blank-faced over the Eskom sabotage as he was over the July riots, one’s got to wonder if he has any game at all
Opinion & Analysis
5 months ago

Unless Ramaphosa belatedly sees sense and gets rid of corrupt members, the party is doomed to die at the next poll
Opinion & Analysis
5 months ago