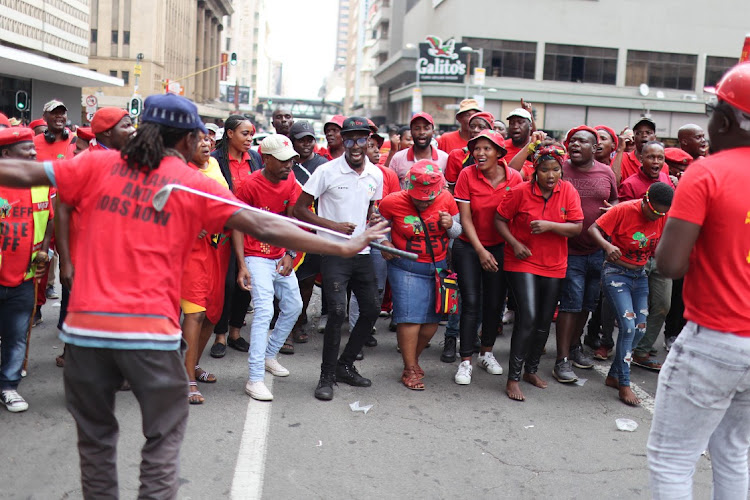 The EFF is set to march to parliament on wednesday. File photo.
Image: Alaister Russell/Sunday Times

The EFF is set to march to parliament ahead of the budget speech on Wednesday to demand an end to what it calls senseless and crippling loans the ANC government takes from various institutions.

Finance minister Enoch Godongwana will table his first budget speech this week. Among other things, he will present the government’s spending framework as the economy struggles to recover from the damage caused by the Covid-19 pandemic.

Due to the fire that ripped through the National Assembly building last month, the budget speech will be held in parliament’s Good Hope Chamber.

“The World Bank Group board of directors approved SA’s request for an R11bn loan. National Treasury reasons for the loan are misdirected in the absence of coherent economic policy reform,” the EFF said.

The EFF maintains SA does not have an economic reform policy.

“The latest GDP decline and the collapse of public finances mired by irregular, unauthorised and fruitless expenditure tells a story of incompetence, mismanagement, and complete government failure,” said the EFF.

Attempts to get additional comment from the party were unsuccessful at the time of publishing this article. It will be updated once received.

This is not the first time the EFF has voiced its dismay over the loans.

Earlier this year, it voiced its opposition to the World Bank loan.

“The National Treasury is using the plight of the poor and the Covid-19 crisis to entrench neoliberal policies. It is a fallacy that the R11bn World Bank loan will help poor people in any way. The same was said about the R70bn IMF loan, but parasitic charlatans of the ruling party looted it while hundreds died while waiting for vaccines,” it said.

Saftu protest on the cards

Members of the SA Federation of Trade Unions (Saftu) will also embark on strike action, demanding a basic income grant, among other things.

The union said the strike will take place at 11am, ahead of Godongwana’s speech.

President Cyril Ramaphosa's inability to defend his state of the nation speech must be a milestone in the slow collapse of the ANC as a plausible ...
Opinion & Analysis
4 months ago

Accountability and the NPA could change it all for SA

My heart sank. In the space of about half an hour on Friday. I opened the ANC's discussion document, hot off the presses, on Reconstruction, Growth ...
Opinion & Analysis
1 year ago