If the message from legal analyst Ismail Abramjee is true, it has a ‘material bearing’, say the public protector’s lawyers 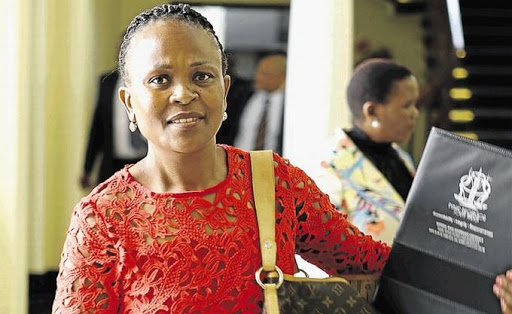 The public protector’s lawyers have written to the registrar of the Constitutional Court to ask if it is true that the apex court will this week refuse her application to reverse an earlier judgment against her, as per a text message sent to opposing counsel in the Western Cape high court.

The message, which was sent anonymously and disclosed by counsel for parliament speaker Andrew Breitenbach SC, was the reason for the last minute postponement of an urgent application in the Western Cape high court to put the brakes on impeachment proceedings in parliament and to interdict Busisiwe Mkhwebane’s possible suspension by President Cyril Ramaphosa.

It has emerged the anonymous text was sent by Ismail Abramjee, whose Twitter biography describes him as a legal analyst and consultant. He did not respond to questions from TimesLIVE. News24 reported he said his text was not based on inside information from the apex court but his own analysis.

Mkhwebane wanted the high court to interdict impeachment proceedings and her possible suspension pending a decision by the Constitutional Court on whether it would rescind, or reverse, its earlier decision on the constitutionality of the impeachment rules which cleared the way for the process against her to go ahead. She applied for rescission in March.

An anonymous text message to one of the lawyers was the cause of a last-minute postponement to the court case by public protector Busisiwe Mkhwebane ...
Politics
2 weeks ago

So far there has been no official word from the Constitutional Court on her application. Courts orders are usually confidential until the moment they are handed down.

On Tuesday morning her high court battle was due to start — dealing with what was to happen in the interim — when it was scuppered by what her counsel Dali Mpofu SC referred to in open court as “an unfortunate development”.

According to the letter from the public protector’s attorneys, the message said: “Hello Adv Breytenbach [sic], Re: The public protector case tomorrow. I have it on very good authority that the ConCourt has declined to hear the public protector’s rescission application. The decision will be made known some time this coming week but not later than Friday. I thought I’d share this with you on a strictly confidential basis. Thanks.”

Mkhwebane’s letter does not name the sender of the letter and, said  Breitenbach, she did not know who it came from. However, the letter says the identity of the sender has since been established.

Abramjee said he would release a full statement later on Wednesday.

According to News24, Abramjee said his message to Breitenbach was based on media reports and his own analysis. He did not have any inside information from the apex court and any insinuation he was linked to judicial capture was defamatory, he told News 24.

After the postponement on Tuesday he tweeted: “Public protector urgent application to interdict parliament postponed. The media had previously reported the judgment of her rescission application was expected by the end of this month.”

In their letter to the Constitutional Court, Mkhwebane’s attorneys said they wanted to “bring these unfortunate developments to the attention of the chief justice and the justices of the Constitutional Court” and “request respectfully your response whether the information contained in the SMS is true or not. If true, it will have a material bearing on the scope of the part A proceedings in the high court”.

President Cyril Ramaphosa has in court papers insisted that he was told by Parliament that impeachment proceedings against public protector Busisiwe ...
News
3 weeks ago