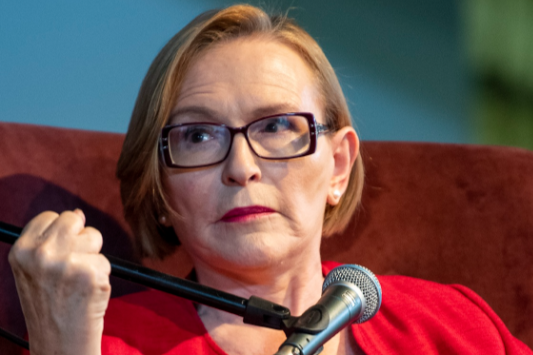 Helen Zille has taken shots at the ANC, and shut the door on any chance of working with the party.
Image: Jaco Marais

DA Federal Council chairperson Helen Zille has shut the door on any chance of working with the ANC, labelling them the "African National Criminals".

The politician, who was heard in an audio clip leaked last year allegedly claiming the DA should go into a coalition with the ANC, took to social media recently to say there are no "decent people left" in the ruling party to possibly work with.

"I have to be honest and admit that, until fairly recently, I thought there were some decent people left in the ANC with whom we might, one day, be able to negotiate a new government. That hope is now well and truly dashed."

She went on to label party members as criminals.

"They are all, indeed, the African National Criminals".

I have to be honest and admit that, until fairly recently, I thought there were some decent people left in the ANC with whom we might, one day, be able to negotiate a new govt. That hope is now well and truly dashed. They are all, indeed, the African National Criminals.

Not enough to form a new government with.

Though Zille did not mention names, some believed that the dig was at President Cyril Ramaphosa.

Ramaphosa rode a wave of optimism after his election as president, promising a "new dawn" and an end to corruption in his 2018 state of the nation address.

His opponents have been quick to point out his failings and empty promises amid factionalism that is ripping the ANC apart.

Ramaphosa has found himself shrouded in controversy after former State Security Agency boss Arthur Fraser laid a criminal complaint against the president, implying he covered up a crime at his Limpopo farm in 2020 after thieves allegedly made off with millions in foreign currency.

PODCAST | In six weeks Cyril can save South Africa

Ramaphosa confirmed the burglary denied any involvement in criminal activity and said he would not step aside.

Leaked audio from 2019 was circulated on social media last year, in which Zille was heard saying the DA would consider going into a coalition with the ANC under Ramaphosa’s leadership.

“We want 20% of South Africans and remember there’s only 8% of white voters. Between 15% and 20% gives us a strong, strong consolidated block in coalitions,” Zille can be heard saying in the audio.

Speaking on CapeTalk, Zille claimed the audio was edited and taken out of context.

Zille said the audio was recorded during a “casual conversation” with the DA’s former Johannesburg caucus leader Funzela Ngobeni at a craft beer pub at Johannesburg’s OR Tambo International Airport.

“Quite unknown to me, I was being recorded. They have carefully edited out the context of that discussion, taken a short clip, waited for two years now that the context was entirely changed, and a week before the election release it as if it means something that it does not mean at all,” Zille alleged.

Helen Zille on crime statistics: 'black lives, like all other lives, really do matter'

DA Federal Council chairperson Helen Zille has questioned the silence of the “Black Lives Matter” movement and its activists amid reactions to the ...
News
3 weeks ago

"This time mayor, you are not alone. You have us and all peace-loving South Africans behind you. Let them live in their past, and we take the country ...
Politics
4 weeks ago

Zille on death penalty calls: ‘Innocent people will hang because we have a failing criminal justice system’

"You cannot rely on police to do good detective work, or the courts to necessarily convict the guilty and exonerate the innocent. Be careful what you ...
News
1 month ago