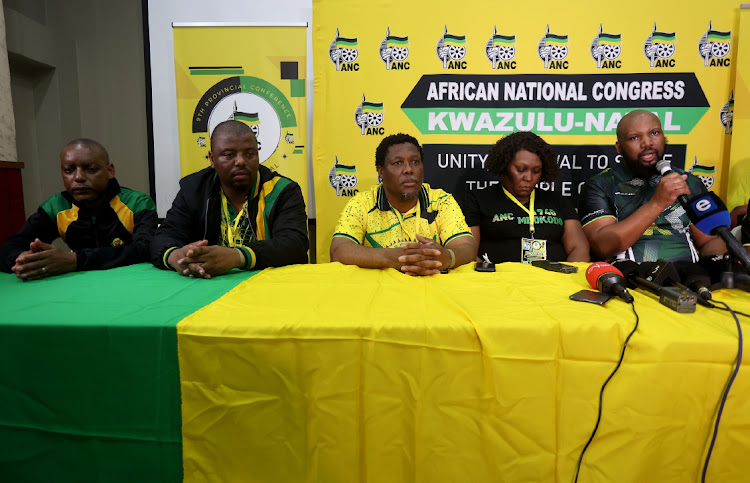 The ANC in KwaZulu-Natal wants the “divisive” step-aside rule repealed.

The party’s newly elected provincial leadership will head to the national policy conference this weekend armed with the resolution said to have been unanimously agreed upon at their elective conference that ended on Sunday evening.

“The conference resolved that delegates to the national policy conference must forward a complete proposal that the step-aside rule must not only be reviewed but must be scrapped,” said newly elected ANC provincial secretary-general Bheki Mtolo.

Step-aside is a rule the ANC’s national executive committee (NEC) adopted that bars corruption and criminally charged party members from taking part in the organisation’s activities, including standing to be elected into any position.

The rule has received pushback from several corners of the ANC who feel it is being applied to deal with President Cyril Ramaphosa’s political opponents.

So far those who have had to vacate their positions owing to the rule include the party’s secretary-general Ace Magashule, a staunch former president Jacob Zuma ally who is facing corruption charges relating to the the asbestos eradication tender in the Free State.

Limpopo strongman Danny Msiza, KwaZulu-Natal’s Zandile Gumede and Mike Mabuyakhulu are also prominent ANC figures whose political activism has been halted because of the rule,

On Sunday night Mtolo said the conference had agreed the application of the rule not only called for it to be reviewed but scrapped altogether.

In Limpopo the party will argue for the rule to be changed to its original state and not what the NEC decided to amend it to. The original state refers to the resolution adopted by the national conference 2017 which said those who are facing allegations of corruption and crime must step aside. The NEC amended it to say only those who are charged.

“The conference notes the implementation of the step-aside rule has had serious repercussions to the unity of the ANC at all levels,” Mtolo said.

“The 2022 ANC KwaZulu-Natal policy conference discussion documents acknowledge the step-aside rule has serious contestation, believing the inconsistent application of the rule deviates from its original intentions and results in  unintended consequences of rejection. We therefore resolved the province will sponsor not only a review of the step-aside rule by the national policy conference but its total abolishment. The application of such a rule should not create confusion or disunity in the ANC.”

Although KwaZulu-Natal is the ANC’s biggest province, the move to completely scrap the step-aside rule is unlikely to gain enough support at the national conference this weekend.

President Cyril Ramaphosa plans to address the ANC’s KwaZulu-Natal conference on Sunday, putting his presidency on the line in a province that still ...
News
3 weeks ago

However, it is highly likely the rule will be watered down, making room for some of those affected to make a comeback.

Ramaphosa and his allies are standing firm against calls for the rule to be repealed as they believe such a move would lead to the party being thrashed at the 2024 national general elections.

His grouping believe the rule is one of the ways the party will renew and rid itself of the stain of being known as a corrupt and patronage party.

The ANC in KwaZulu-Natal has also adopted a resolution that Zuma must be given full support by the party in his ongoing court cases.

“Conference therefore resolves the decision not to show support to [former] president Zuma as an organisation is not implementable and should be reviewed and done away with,” Mtolo said.

KZN premier Sihle Zikalala has been voted out of the position of ANC provincial chairperson.
Politics
2 weeks ago

The ANC has elected new leaders in the key region of KwaZulu-Natal, though it remains unclear whether the new collective will back President Cyril ...
Politics
2 weeks ago