Women's game in good shape despite Sharapova upset of Halep 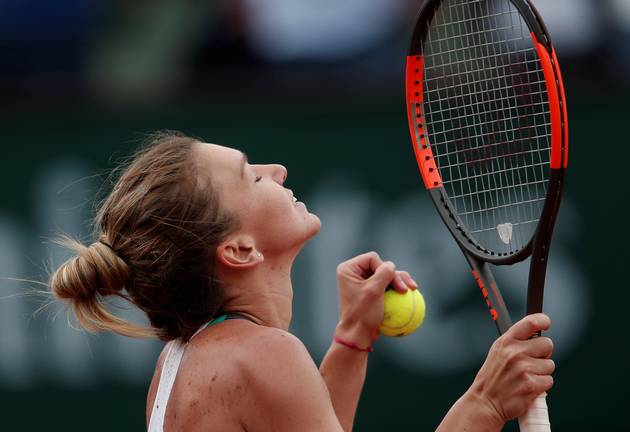 For all the clamour surrounding the successful return of Maria Sharapova to grand slam action at the US Open on Monday, one question lingered in the night air.

Not whether Sharapova deserved the wildcard she received into the event, having served a 15-month doping ban.

But rather, what does it say about the state of the women’s game that someone who has not played a grand slam match for 19 months can come back and beat the world No. 2?

It is a criticism often aimed at women's tennis, especially when contrasted with the men's game, which has been dominated by the same four players over the past decade.

"How can Roger (Federer) come back from time away and win everything?," Patrick Mouratoglou, the coach of Serena Williams, told Reuters.

"I heard a lot of this kind of criticism, because a lot of people don’t like women’s tennis, so they try to attack through any opportunities they have.

"But this is ridiculous. Those players are really exceptional. They have a different level… they have the whole package.

"Mentally, they are champions, so it’s not a surprise that they take back what they should be and what they deserve."

Eight women began the US Open with a chance to become world number one, an unprecedented situation which has added excitement to an already open draw.

Mouratoglou said the vacuum at the top is only temporary and is caused by the absence of Williams, who is preparing to have her first child.

"Anyone can win," he said. "Clearly, there was a boss on Tour, she left and - I don't want to say the next one because Serena's coming back - but nobody really took the spot.

"It shows it's not only about tennis it's a lot about handling mentally that spot, and being a boss. A lot of players have tried and they didn't succeed.

"It's not going to stay like this for a long time, it's an in-between period and it's fun because there is a lot of uncertainty and I think it makes the tournament exciting."

Roger Federer and new world No1 Rafael Nadal will headline this year's final grand slam of the year in New York starting tomorrow and will believe ...
Sport
4 years ago

Mary Carillo, a former grand slam mixed doubles champion and now a broadcaster with the Tennis Channel, said the situation was not ideal.

"I'm shocked to see how many people could be number one," she told Reuters. "I don't think that looks good, I'm not sure that's something to celebrate.

"I don't mind it if there's a tight little battle when there's maybe three people we can discuss but when there's eight, no, I don't think that's necessarily a good thing at all."

But Carillo agreed with Mouratoglou's assessment.

"Frankly, if (Garbine) Muguruza wins a second major this year, I don't care what the ranking computer spits out, she had the best season of anybody.

Mouratoglou, a presenter with Eurosport and ESPN at the U.S. Open and whose book, The Coach, charts his career, said he preferred uncertainty to formality, such as at the French Open, where Rafa Nadal has won the title 10 times.

"Roland Garros is a great tournament but like we said before about soccer, it's a game we play with 11 players against 11 players and in the end, Germany wins," he said.

"Even on the men's side (at the U.S. Open) we don't know who's going to win, really. Anything can happen."