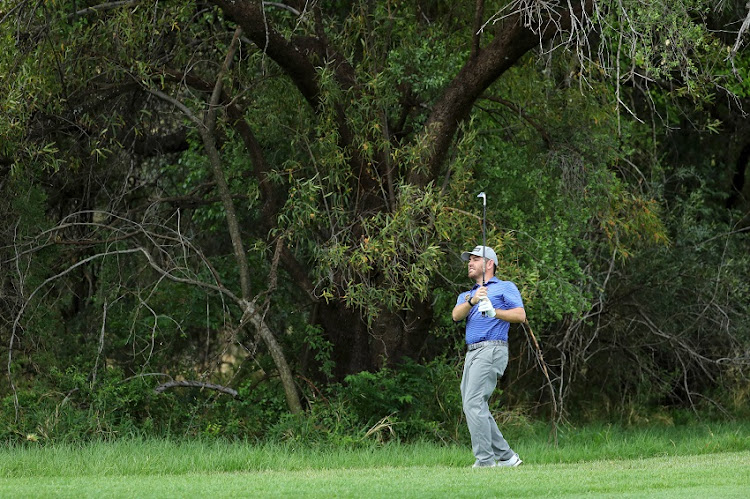 Louis Oosthuizen of South Africa chips on to the 14th green during day one of the Nedbank Golf Challenge hosted by Gary Player at Gary Player Golf Course on November 14, 2019 in Sun City, South Africa.
Image: Warren Little/Getty Images

Home favourite Louis Oosthuizen produced a stunning birdie blitz to card a faultless nine-under-par 63 for a three-shot lead after the first round of the European Tour’s Nedbank Golf Challenge on Thursday.

Former Open champion Oosthuizen, seeking his maiden title in the tournament regarded as ‘Africa’s Major’, turned in 32 and roared on with four birdies in his first five holes on the back nine as he burst clear of the field in search of a 10th European Tour win.

His round was made more remarkable by the fact that he missed Wednesday’s Pro-Am tournament with kidney stones and was still unsure whether he would compete after waking up on Thursday morning.

The South African leads at the Gary Player Country Club by three shots from Belgian Thomas Detry, who overcame a bogey six on the second hole to card seven birdies in a round of 66.

Italian Guido Migliozzi set the early pace with six birdies on his front nine to turn in 30, but found it tough heading back to the clubhouse with bogies on the par-three 12th, and par-four 15th and 17th. He finished the first round in third following a 67.

Defending champion Lee Westwood is a further shot back after a bogey-free 68, the same score as veteran South African Ernie Els, who also carded four birdies.

The Nedbank Golf Challenge is the penultimate tournament in the 2019 Race to Dubai, whose leader, Austrian Bernd Wiesberger, carded an opening round 71 for tied 25th.