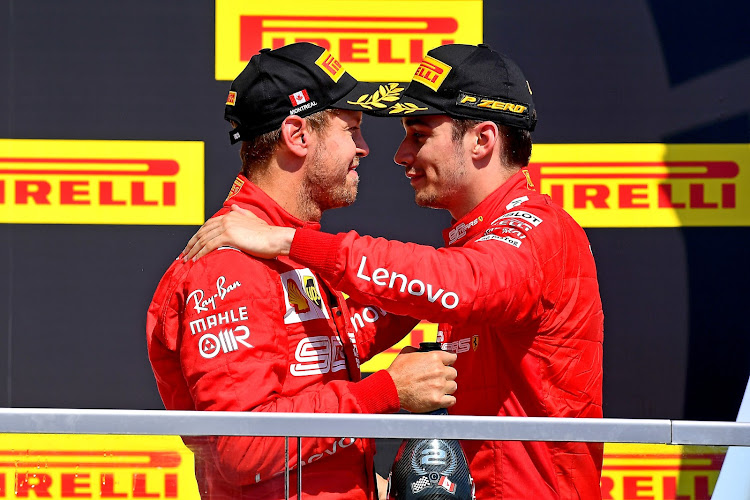 Sebastian Vettel and teammate Charles Leclerc on the podium in Montreal.
Image: Ferrari

Ferrari announced a restructuring of their Formula One (F1) technical department on Wednesday after struggling in the first three races of a season so far dominated by Mercedes.

The sport's oldest, most glamorous and successful team -- last year's runners-up -- are fifth in the championship with Sebastian Vettel and Charles Leclerc pushed into more of a midfield battle.

Ferrari said in a statement the team would have a more focused and simplified chain of command, with the heads of each department given "the necessary powers to achieve their objectives."

Other roles stay the same, with Enrico Gualtieri overseeing the power unit, Laurent Mekies remaining as Sporting Director in charge of trackside activities and Simone Resta head of chassis engineering.

Lewis Hamilton has hit back at past Formula One champions Mario Andretti and Jackie Stewart for their comments on his anti-racism stance and push for ...
Motoring
10 months ago

"We are making changes to the technical side of the organisation so as to speed up the design and development on the car performance front," said principal Mattia Binotto.

"A change of direction was needed to define clear lines of responsibility and working processes, while reaffirming the company's faith in its technical talent pool.

"The department run by Enrico Cardile will be able to count on the experience of Rory Byrne and established engineers such as David Sanchez.

"It will be the cornerstone of the car’s development."

South African designer Byrne, 76, was a key figure during Ferrari's golden era in the early years of the century with seven-times champion Michael Schumacher in a team led by Jean Todt with Ross Brawn as technical director.

Ferrari have not won a driver's title since Kimi Raikkonen's success in 2007 while their last constructors' crown was in 2008.

Vettel, a four-times world champion with Red Bull, is leaving at the end of the year with Monegasque Leclerc the face of the future.

Binotto said Ferrari had to "make a decisive change, raising the bar in terms of the responsibilities of the department heads."

"We have said it several times, but it's worth repeating: we have started to lay the foundations of a process which should lead to a new and enduring winning cycle," he added.

"It will take some time and we will suffer setbacks like the one we are experiencing right now in terms of results and performance."

Lewis Hamilton expects Silverstone to feel "super-weird" as he heads back to Britain on top of the Formula One world championship standings.
Motoring
10 months ago

"The stability of the general clinical conditions and the neurological picture allowed the transfer of the champion to a specialised centre for ...
Motoring
10 months ago

On Sunday Renault lodged an official protest for the second race in a row at the Hungarian Grand Prix against Formula One rivals Racing Point, ...
Motoring
10 months ago