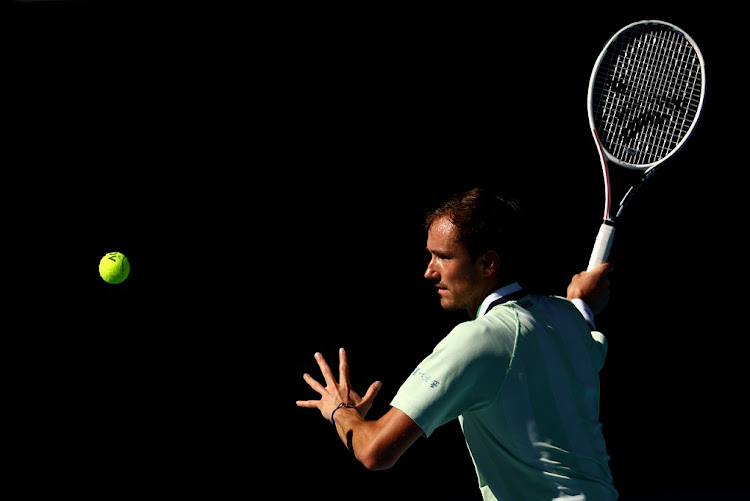 Daniil Medvedev of Russia plays a forehand in his third round singles match against Botic van de Zandschulp of the Netherlands on day six of the 2022 Australian Open at Melbourne Park on January 22 2022 in Melbourne.
Image: Clive Brunskill/Getty Images

World number two Daniil Medvedev swept aside Dutch Botic van de Zandschulp 6-4 6-4 6-2 on Saturday to reach the fourth round of the Australian Open and stay on track for a second successive Grand Slam title.

Van de Zandschulp, ranked 57th in the world, was the only player to take a set off the Russian when the pair met in their previous meeting at last year's US Open, which Medvedev went on to win for his first major title.

Medvedev, the highest-ranked player remaining in the men's draw due to the absence of Serb Novak Djokovic, made it look easy on Saturday, breaking his opponent's serve four times in the match to win under two hours at the Margaret Court Arena.

The 2021 Melbourne Park finalist will meet either Australian wildcard Christopher O'Connell or American Maxime Cressy for a place in the quarter-finals.

Sixth-seed Rafa Nadal dropped his first set at this year's Australian Open but still powered through to the fourth round with a 6-3 6-2 3-6 6-1 ...
Sport
5 months ago

An Australian court said on Thursday it dismissed tennis superstar Novak Djokovic's challenge to his visa cancellation as the minister who revoked it ...
Sport
5 months ago