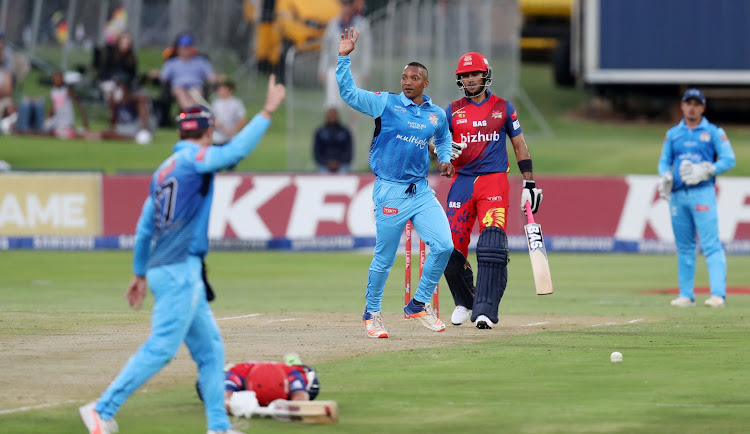 Malusi Siboto of the Titans celebrates after taking a wicket of Wiaan Mulder of the Lions during 2017 T20 Ram Slam match between Multiply Titans and Bizhub Highveld Lions at Supersport Park, Pretoria South Africa on 12 November 2017.
Image: Muzi Ntombela/BackpagePix

Titans produced an impressive collective batting display under pressure of the revised target to beat the Highveld Lions by eight wickets (D/L method) to earn a bonus point in the second match of the Ram Slam T20 Challenge double header in Pretoria on Sunday afternoon.

Lions ended their innings on 127/6 after reduced 15 overs and the revised D/L target for the Titans was 135 but the hosts did not have to move into top gear as they raced to victory after 11.2 overs with 22 balls to spare.

Titans steadied the ship with captain Albie Morkel and AB de Villiers ending the match unbeaten on 41 and 50 respectively after they lost the early wickets of openers Quinton de Kock and Henry Davids to highly impressive Lions teenager Wiaan Mulder.

Titans started their chase impressively with Quinton de Kock racing out of the blocks with a knock of 39 off 23 balls before he was dismissed in the fifth over when his top edged pull shot was caught by Nicky van der Bergh at long leg from the bowling of Mulder.

Mulder struck for his second wicket of the night in the seventh over when Henry Davids (5) inside edged the ball to his own stumps but that’s all they got as Morkel and De Villiers took helped their team over the line with some ferocious batting.

Lions captain Aaron Phaniso won the toss and elected to bat first and they went off to a terrible start as they lost two quick wickets in the first over without putting something on the score board.

The first Lions batsman to return to the pavilion was Rassie van der Dussen who was caught down leg side by alert Titans wicketkeeper De Kock from the bowling of Morkel in the second ball of the innings.

Morkel produced another brilliant moment two balls later when he removed Mangaliso Mosehle whose effort was taken by De Villiers at extra cover and Marques Ackerman followed when he was caught by Malusi Siboto from the bowling of Morkel.

After the early loss of Van Dussen, Mosehle and Ackerman, Dwaine Pretorius and Reeza Hendricks, who ended unbeaten on 67 off 42 balls, embarked on a rebuilding mission.

Their partnership was finally broken in the tenth over when Farhaan Behardien caught Pretorius on the wide long on boundary from the bowling of David Wiese leaving the Reeza Hendricks and new man on the crease Wiaan Mulder to establish another partnership.

Henrdricks and Mulder did not last long together on the crease as the latter was run out by Siboto in the eleventh over before rain interrupted proceedings for just over an hour with the Lions on 103/5 after 13 overs.

After restart, Lions lost Nicky van der Bergh when he was caught by Farhaan Behardien on the long on boundary from the bowling of Lungi Ngidi.