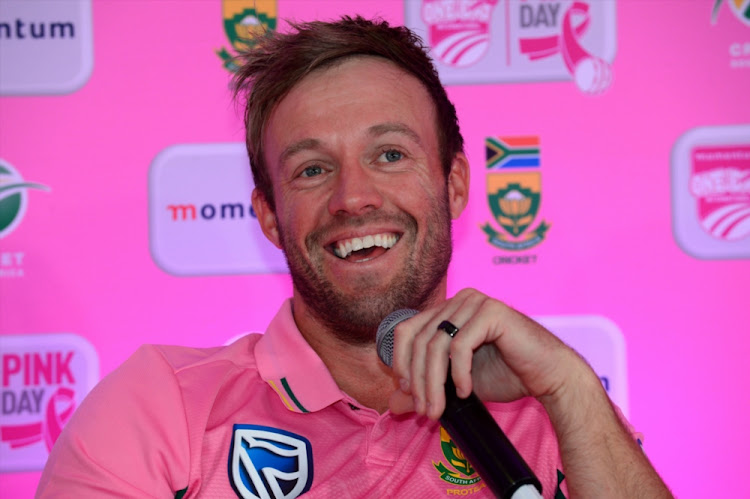 Proteas batting mainstay AB de Villiers has been cleared to play in the Pink ODI against India at Wanderers Stadium in Johannesburg on Saturday.

De Villiers‚ who missed the first three matches because of the finger injury he sustained in the third Test against India last month‚ hit the ball in the nets at the Bullring on Friday morning and he showed no signs of discomfort.

Proteas coach Ottis Gibson is still without influential captain Faf du Plessis and Quinton de Kock‚ who are nursing respective injuries and De Villiers’ availability comes at the right time for the Proteas who are desperate for a win as they are 3-0 down in the six-match series.

Speaking as South Africa wrapped up their preparations for the seventh Pink ODI‚ where they have won all the previous six‚ all-rounder Chris Morris said De Villiers’s inclusion will help lift the team a team under pressure.

“He brings the calmness and he brings the experience. To have a world-class player coming back to our team is good news and personally I enjoy sharing the field with him.”

PinkDay is now so etched in our collective consciousness it has lost it’s space.
Sport
4 years ago

Morris said that former captain De Cilliars will also be able to impart valuable pointers on how to play the devastating Indian wrist spinners‚ who have wreaked havoc in the three ODIs.

“To me he is‚ if not one of the best players in the world‚ then to have played for South Africa.

“He brings so much more than just runs‚ but the AD de Villiers factor. He is good to go and he will definitely give impetus with regards to spin or seam.

With the Proteas having lost the first three matches‚ Morris dismissed suggestions that De Villiers will be put under pressure to carry the team for their first win in this series.

“At the moment we are all under pressure because we are 3-0 down in this series. I don’t think he will feel any added pressure – he is just going to come and be himself.

“He is a dangerous player and it is exciting to see how he is going to come out.

“We know we have under-performed but we are all dying to put up a good performance.”

March deadline to save T20GL may be ‘too tight’ for CSA

Cricket South Africa (CSA) acting chief executive Thabang Moroe has revealed that the association have until the end of March to come up with a ...
Sport
4 years ago

Gauteng Cricket Board (GCB) chief executive Greg Fredericks has described the decision by the International Cricket Council (ICC) to give Wanderers ...
Sport
4 years ago

AB may be back for Wanderers ODI

It’s a comment on South Africa’s uncertainties in their one-day series against India that the return of AB de Villiers to the fold isn’t unqualified ...
Sport
4 years ago