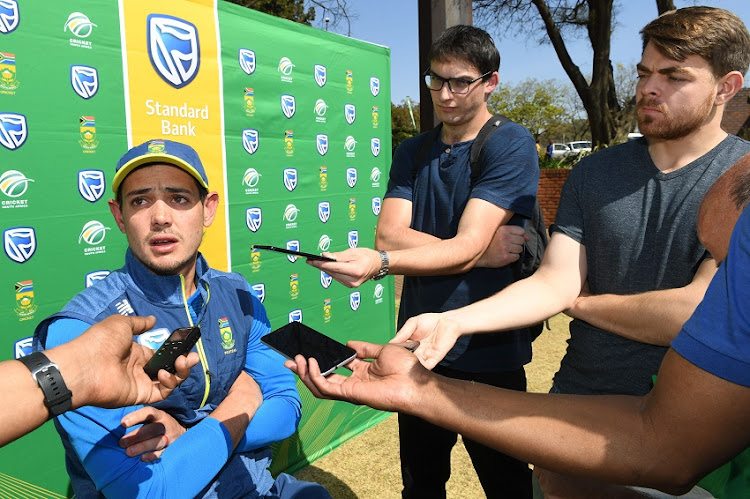 Proteas wicketkeeper/batsman Quinton de Kock has urged his team-mates to brace themselves for the worst during their tour of India this month.

South Africa have three T20s (the first T20 is at Dharamsala on September 15)‚ where De Kock will captain the side in the absence of Faf du Plessis‚ and as many Tests against their hosts.

The attention has turned to the likely condition of the pitches and looking ahead to what is going to be testing tour on turning surfaces‚ De Kock said they are preparing for the worst as they don’t know what to expect from their hosts.

“From our side‚ what we are going to do is to make sure that we prepare for the worst‚” he said‚ adding that there is a possibility of getting good wickets in T20s.

“To be honest‚ I don’t know what we are going to get.

"In T20s I don’t think it will spin that much because in the IPL they prepare pretty good wickets.

"But Test matches are a different story and it could end up turning on day one.

"It is more of a mental thing and not being caught up too much on whether it is spinning or not‚ that is what it boils down to.”

The last time the South Africa were in India in 2015 they were thrashed 3-0 on sub-standard pitches and De Kock said they would keep their eyes open when they arrive on the sub-continent. “The last time we were there‚ guys didn’t really expect those type of surfaces but this time around we will have a little bit of head start about that‚" he said.

"We will keep our eyes open and make sure that we are a little bit better than last time.

"I am not sure if they are going to prepare similar or better wickets than the last time we were there.”

“Maybe‚ because of the fact that they are backing their fast bowling attack‚ they will prepare better wickets‚" he said.

"Unfortunately‚ I don’t know what we are going to get.

"You could get there and they play two or three spinners or they go with the seamers.

"You will never know what will happen.

"We will see what happens when we get there and make sure that our preparations are good.”