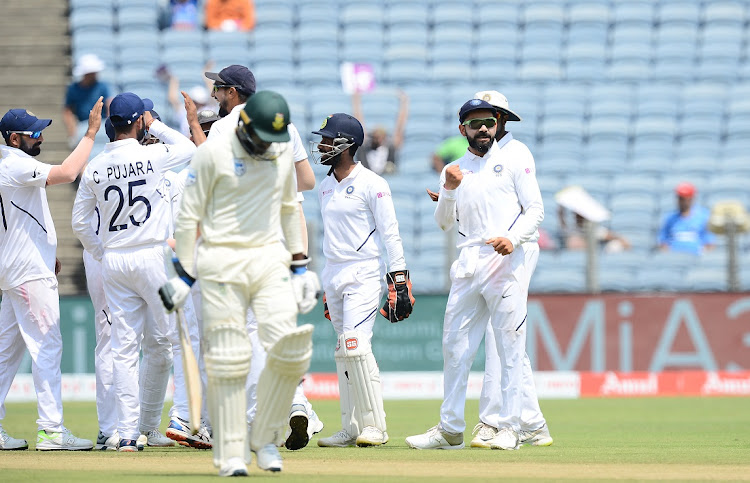 India's fast bowlers Umesh Yadav and Mohammed Shami made early inroads to leave South Africa in complete disarray on day three of the second Test in Pune on Saturday.

The touring side, trailing the three-test series 1-0, crawled to 136 for six wickets at lunch, still 465 runs behind India’s mammoth first innings total of 601-5 declared.

Faf du Plessis was unbeaten on 52 with Senuran Muthusamy six not out at the break with South Africa relying on their captain to first avoid follow-on and then bid for a draw to keep the series alive.

Yadav’s last appearance for India was at Perth against Australia in December and he was only included in the side for the second test with the Pune pitch sporting a tinge of green.

Shami had earlier picked up his second wicket and the first of the day for India in the third over by sending back nightwatchman Anrich Nortje.

Du Plessis and Quinton de Kock then fought back for South Africa and showed determination and positive intent against India’s spinners during a 75-run stand after the side had been reduced to 53-5 at one stage.

Off-spinner Ravichandran Ashwin broke the partnership by bowling out De Kock for 31 in a body blow to the touring side. Du Plessis played some classic drives and effective sweep shots, hitting eight fours and a six during his aggressive 76-ball innings.

Mayank Agarwal closed in on his second hundred in as many tests as he combined with Cheteshwar Pujara to put India on course for a big first-innings ...
Sport
2 years ago

Keshav Maharaj wouldn’t have known whether to laugh or cry in Pune on Friday‚ even though he might have been too tired and sore to do either.
Sport
2 years ago