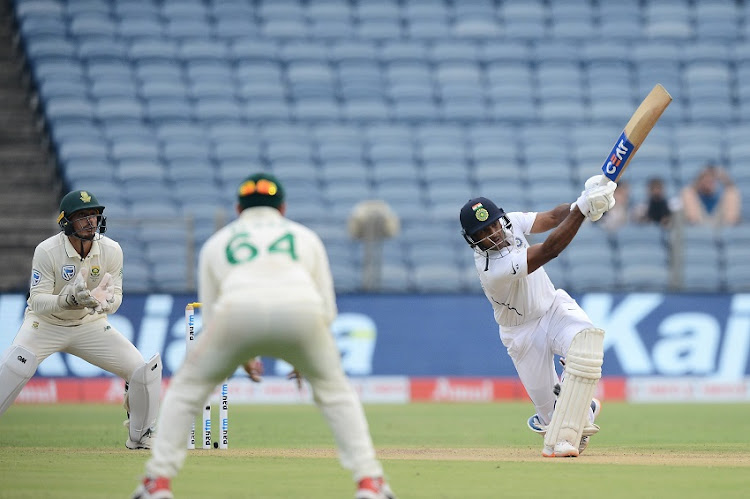 Mayank Agarwal closed in on his second hundred in as many tests as he combined with Cheteshwar Pujara to put India on course for a big first-innings total against South Africa in the second test at Pune on Thursday.

India lost Rohit Sharma cheaply during a difficult opening spell from South Africa’s fast bowlers but weathered the storm to reach 168 for two wickets at the tea break.

Opener Agarwal was unbeaten on 86, while Pujara was out for 58 shortly before tea with the duo putting on a second-wicket stand of 138 for the hosts, who lead the three-test series 1-0.

Both teams added a fast bowler to their sides from the opening test at Visakhapatnam, which India won by 203 runs, with the Pune surface looking harder and sporting a tinge of grass cover.

South Africa’s pacemen challenged the Indian batsmen during an inspired opening spell after Virat Kohli won the toss and chose to bat in his 50th test as captain.

Rohit, after enjoying the highs of twin hundreds in his maiden test as an opener at Visakhapatnam, faced a much more potent opposition on a surface offering movement.

Kagiso Rabada bowled with intensity without success until he managed to induce an edge behind the wicket from Rohit (14).

Agarwal and Pujara played themselves in patiently and then improved their scoring rate as the partnership developed.

Agarwal, who also hit a ton in the opening test, appeared shaky at the start and survived a close leg before appeal off seamer Vernon Philander.

He also had problems against short-pitched deliveries and was hit on the back of his helmet by debutant fast bowler Anrich Nortje but that blow seemed to wake him from his slumber.

The 28-year-old, playing his sixth test match, hit the same bowler for three exquisite off-driven boundaries in an over that seemed to kickstart his innings. He has hit 15 boundaries so far in the knock.

Pujara had an usually slow start and hit Rabada straight to Temba Bavuma at short leg before he had opened his scoring but the fielder failed to hold on to the sharp chance.

He was nimble in his footwork against the spinners, hitting nine fours and a six, and appeared in complete control before edging Rabada to slip just when it seemed like South Africa would go wicketless in the second session.