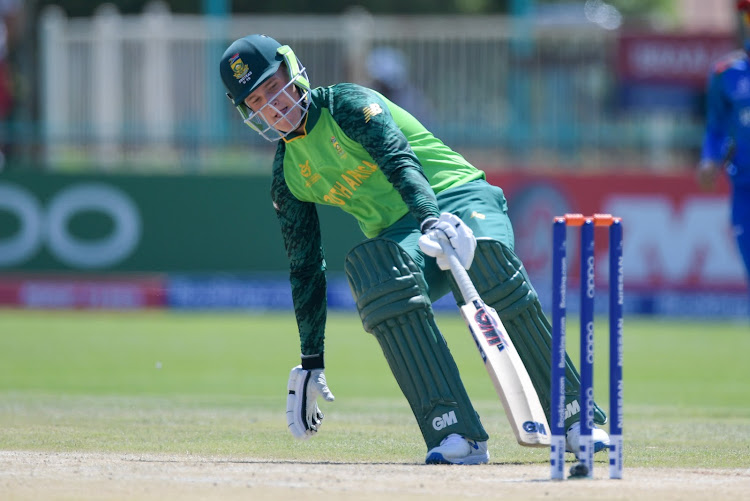 Captain Bryce Parsons during the 2020 ICC U19 World Cup match between South Africa and Afghanistan at Diamond Oval on January 17, 2020 in Kimberley.
Image: Louis Botha/Gallo Images

When South Africa Under-19 faltered badly against Afghanistan‚ their captain Bryce Parsons shouldered the responsibility.

On Wednesday‚ he responded in the best way possible when he led the way with a blistering 93-ball 121 that set up South Africa's 150-run win against Canada in their Group D game in Potchefstroom.

With Afghanistan having beaten United Arab Emirates (UAE) on Wednesday to qualify for the Super League stage‚ all South Africa need to do is to beat the UAE in Bloemfontein on Saturday to reach the same stage.

While it's going to be easier said than done‚ Parsons ensured their play-offs fate is in their own hands.

Parsons though was happy with how he saw his batting job through and the fact that to led to a win.

“I was in during the last game and I should have converted my started. We went past that one‚ we looked at this particular game that we needed to win and we did that‚” Parsons said.

“We lost a bit of confidence against Afghanistan. It was really tough for us‚ but the way we bounced back for this game‚ the credit must go to the players. The way we pitched up in this game was exciting‚ especially with how we moved forward in the short turnaround.”

While question marks hand around the efficiency of Andrew Louw as an effective opener‚ none remain with regards to Jonathan Bird.

In Tyrese Karelse‚ Lawrence Mahatlane may have found a Michael Bevan prototype with his seamless ability to pinch the strike and navigate crucial boundaries.

The opener (Bird) and middle-order nugget (Karelse) will face sterner tests‚ especially when they face stronger sides‚ but their contrasting 50's set up and powered home SA's imposing 349/8 that Canada couldn't get close to.

Their contributions weren't lost on Parsons. “Credit must go to the way Jonathan Bird started the innings. He set the platform but the batting unit came together as we had four 50-run partnerships. They were key in this game and we're happy that the batting unit clicked‚” Parsons said. “In terms of how we started the intent was there and Jono showed us the way with the platform. We had a good start and all our batters followed through and got really good scores. We're looking forward to the next game.”

That next game in Bloemfontein on Saturday will determine who'll most probably play India‚ who'll top Group A after convincing wins against Sri Lanka and New Zealand.

Parsons understood the significance of the play-off game and what is riding on it.

“It's going to be a massive game and like the one we played today‚ each game is going to be like a semi-final. We take each game seriously and we saw how good a side they are when they beat Canada. We know it's a must win game for us‚” Parsons said.