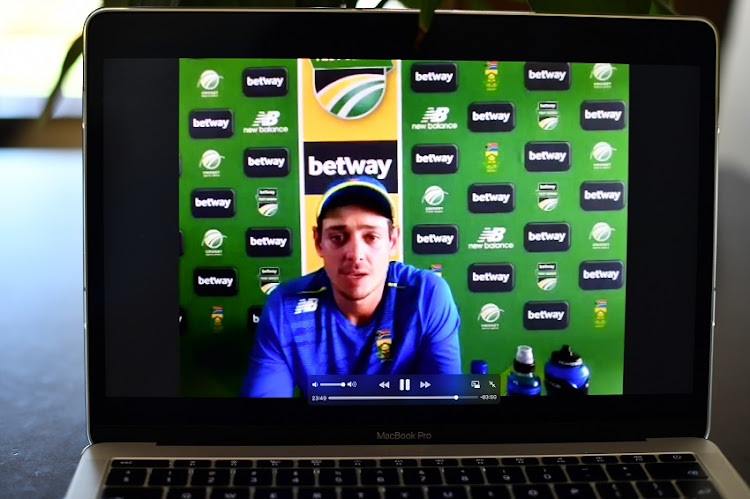 Sipamla‚ who was on debut‚ finished his two innings as the leading wicket-taker with six scalps to his name, while Mulder‚ who was playing his second match‚ returned with five of wickets of his own and made a contribution of 36 runs.

De Kock said 22-year-old year Sipamla showed character as he recovered from a disappointing day one when he finished with figures of 1/68 to bounce back and stamp his authority on the match that was won comprehensively.

“I think for Lutho it was just Test match debut nerves‚ that’s what it all came down to‚” said De Kock.

“But when we spoke to him he came back very nicely and the way he bowled is the way he has been bowling in the nets. That’s what we knew what he could do. It was a great comeback from him and it was great character shown by him.

“We had to think about it as the opening bowler on his debut Test match‚ obviously there was a bit of nerves but once he came back it was great to see his fight.”

Done and dusted at @SuperSportPark where #Proteas thumped #SriLanka by an innings and 45 runs in the #BoxingDayTest. pic.twitter.com/87PpkH8nDA

De Kock said the eye-catching performance of 22-year-old Mulder bodes well for the Proteas as he provides depth for the crucial all-rounder position where Andile Phehlukwayo and Dwaine Pretorius have been tried.

“An all-rounder who can add value with the ball and with the bat is always key. He came out and showed what he is all about‚” De Kock said about Mulder.

“It’s great to see a youngster who bowl with maturity and also bat with intent. It’s good to see him coming through and I hope he carries on with the form.”

Sipamla and Mulder offer genuine hope for the future, but veteran and former captain Faf du Plessis gave a reminder of what he is still capable of with a breathtaking knock of 199.

“There is always talk of youngsters coming through the ranks but you need to find a balance and Faf came out to show his leadership out there‚” De Kock said.

“It’s great to have a guy like that in our team because he has been under a lot of pressure situations in his life. There was no better person in the team to handle pressure and he did that very well. He showed his experience and leadership out there.”

South Africa have completed a resounding innings and 45-run Boxing Day Test victory over Sri Lanka with a day-and-a-half to spare at SuperSport Park ...
Sport
4 months ago

Proteas close in on huge win against Sri Lanka

SA are closing in on a what will be a resounding victory over woeful Sri Lanka.
Sport
4 months ago