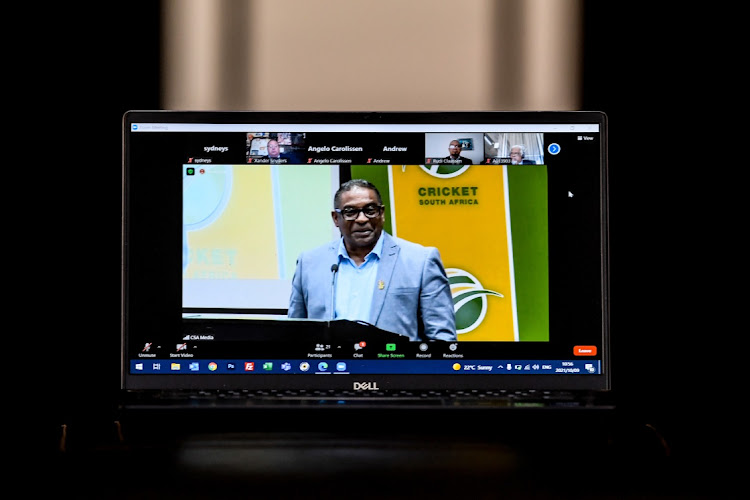 Cricket SA (CSA) board chairperson Lawson Naidoo said while the proverbial storm is not over, there are encouraging signs the organisation is on the right path to self-correction and recovery.

Naidoo said this while delivering his report at an annual general meeting at the weekend where CSA reported a loss of R221m for the year ended in April.

Despite the loss, the organisation reported an unqualified report and that it is liquid and a going concern.

The CSA meeting was the first since the new majority independent board led by Naidoo was constituted in June and also marked a reflection of their first 100 days office.

“I am honoured to have this opportunity to present the CSA integrated report 2020/21, which captures the organisation’s work over the past financial year ending in April 2021,” said Naidoo.

He said the board has hit the ground running with 14 meetings between June 22 and October 9 in their quest to address the administrative shortfalls, governance and reputational issues that have plagued CSA over the past few years.

“We have held many meetings of the board and sub committees which sometimes ran into late at night as we sought to meticulously sift through the priority areas that demand our attention.

“This was by no means an easy task as many areas were competing for our attention, and I say this while acknowledging the valiant efforts of the interim board to steady the ship, the members council and, not least of all, the dedication and commitment of the staff.”

CSA has solid foundations that are being laid to make the organisation great again, he said.

“CSA is blessed to be endowed with a board of consummate professionals who are also passionate about the game and share a vision of restoring cricket to its former glory.”

The new CSA board’s first 100 days have been spent on restoring the credibility and reputation of the organisation with all its stakeholders.

“Our first point of call was to reach out to our stakeholders to assure them the CSA is well on the path of self-correction and recovery.

“These events have proven to be fruitful, have begun to cultivate a sense of optimism and have started a critical process of rebuilding that trust.

“We need to work together as the cricket family if we are to fulfil the aspirations of players at allevels of the game, the fans, the staff of CSA and our partners and stakeholders.”

Naidoo said the CSA has devised a five-year turnaround strategy ahead of the organisation’s 30th anniversary.

“We are acutely aware of our responsibilities to the cricket-loving nation who have high expectations of us, and rightly so. We cannot dare fail them.”

CSA finances and operations have been overseen by three different boards since the Chris Nenzani-led board resigned en masse in October last year.

The previous board, before they were replaced with a ministerial appointed interim board in November, drew up a strategy from 2020 to 2024.

The strategy was amended by the interim board and now the Naidoo-led board.

“In many respects this is a unique report in that the year under review was presided over by two distinctive boards and has been signed off by a third board.

“I am pleased to inform you that despite the challenges the CSA has been through, we have achieved an unqualified audit.

“We have used this integrated report as a marker for certain strategic interventions that are at an advanced stage of planning.

“The board’s five-year strategy has been engineered so the CSA has the right values, the right people, the right systems and the right structures in place to ensure  the organisation is financially sustainable, administratively competent and an enticing organisation to do business with.

“These are the strong foundations that are going to be necessary for expanding the game to all corners of our country and to propel us to success on the international stage.”

Cricket SA (CSA) held their first annual general meeting since the new majority independent board was constituted in June and has reported a R221m ...
Sport
6 days ago

Proteas top order batter Aiden Markram is hopinglessons from his short Indian Premier League stint with the Punjab Kings will be valuable for him and ...
Sport
4 days ago

Former Proteas stalwarts Makhaya Ntini and Robin Peterson have shared contrasting views on what to expect from SA at the ICC T20 World Cup in the ...
Sport
1 week ago

The chairman of Oman's cricket board told Reuters he would have had to wave "Goodbye" to the Twenty20 World Cup had a deadly storm that ripped ...
Sport
1 week ago

As the Proteas edge closer to the ICC Men's T20 World Cup in the United Arab Emirates (UAE) and Oman later in the month, left-arm spinner Bjorn ...
Sport
1 week ago