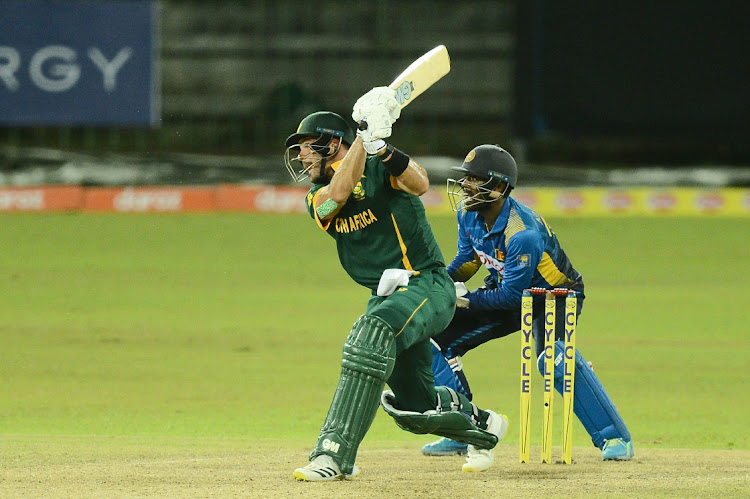 Proteas batsman Aiden Markram is hoping to draw from the experiences of playing for the Punjab Kings during the World Cup.
Image: Isuru Sameera Peiris

Proteas top order batter Aiden Markram is hoping lessons learnt from his short Indian Premier League (IPL) stint with the Punjab Kings will be valuable for him and SA during the fast-approaching ICC T20 World Cup.

The IPL, which was suspended due to Covid-19 in India earlier in the year, resumed in the United Arab Emirates (UAE) last month, where the World Cup will be played from next week.

SA starts the tournament with a mouth-watering clash against Australia in Abu Dhabi next week and Markram said playing for the Punjab Kings exposed him to the conditions and playing under pressure.

“It was very enjoyable and obviously it is different to how a lot of normal teams work. It was nice to get out and play on the conditions where we are going to play the World Cup,” Markram said about his stint with Punjab Kings where he scored 146 runs in six matches.

Markram, who is an established opener in all formats, batted at number four or five for the Punjab Kings and the unfamiliar position was a good challenge for him.

“Playing in a less familiar role was a nice challenge for me and there was a lot of learning. The few weeks I was with the Punjab Kings were good for me.

“I am not sure if playing in an unfamiliar position helped to grow my game but it was a good experience. It was nice to be exposed to that situation of batting a different position, being put under pressure and playing a seriously good standard of cricket.

“I think being exposed to it, to be able to learn on the job and to mingle and chat with some seriously good players who have done well on the IPL circuit was good. It was nice to get some information out of them on how to work things out and how to deal with situations in the middle during matches.”

Some of the matches he played for Punjab Kings went to the wire and Markram expects the same during the World Cup.

“Pressure can only have helped because all our games were incredibly close. I would have liked to have gone over the line more but unfortunately it was not the case. I think T20 matches in the World Cup, domestic or international always comes down to those last few overs and some goes down to the last ball.

“I am pretty sure going into this World Cup that it is going to be similar with matches going down to the wire and it is about dealing with pressure because two or three balls can potentially be decisive.”

Cricket SA (CSA) held their first annual general meeting since the new majority independent board was constituted in June and has reported a R221m ...
Sport
7 months ago

Former Proteas stalwarts Makhaya Ntini and Robin Peterson have shared contrasting views on what to expect from SA at the ICC T20 World Cup in the ...
Sport
7 months ago

The chairman of Oman's cricket board told Reuters he would have had to wave "Goodbye" to the Twenty20 World Cup had a deadly storm that ripped ...
Sport
7 months ago

Familiarity of the conditions in the case of South Africans currently playing in the Indian Premier League (IPL) is going to be valuable for the ...
Sport
7 months ago

Proteas limited-overs captain Temba Bavuma and Springboks skipper Siya Kolisi are good friends when they are not wielding the willow or chasing the ...
Sport
7 months ago

As the Proteas edge closer to the ICC Men's T20 World Cup in the United Arab Emirates (UAE) and Oman later in the month, left-arm spinner Bjorn ...
Sport
7 months ago

Temba Bavuma says batters will have a tough time in the United Arab Emirates during the T20 Cricket World Cup, from October 17 to November 14, as he ...
Sport
7 months ago