Underdogs bag cup in a final marked by atrocious fielding 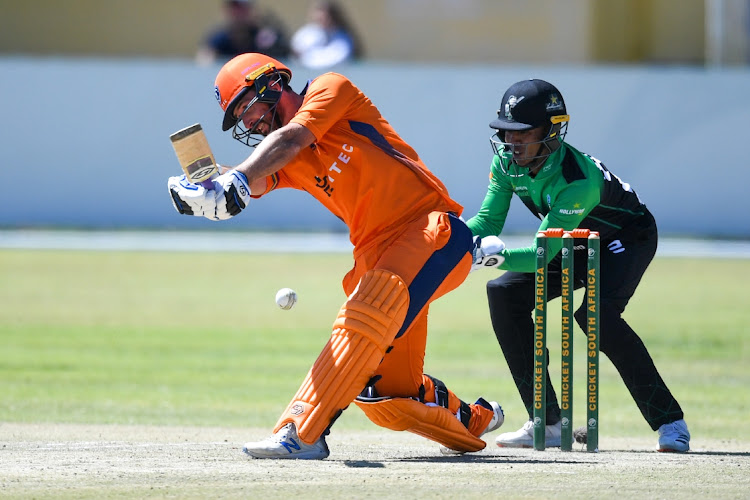 Pite van Biljon goes on the slog for the Knights in their CSA T20 Knock-out competition final against the Dolphins in Kimberley. (Photo by Louis Botha/Gallo Images)
Image: Louis Botha

The Knights surged to a first trophy in 10 seasons when they beat the much fancied Dolphins in the final of the CSA Provincial Knockout competition in Kimberley on Friday.

They beat the Dolphins by just seven runs though they appeared to have a hand on the trophy midway through the chase.

It was their first T20 trophy for 15 years after they finished last in last year's competition.

The Knights, who sneaked into the final by virtue of a superior net run rate when their semifinal against the Dragons got washed out on Thursday, made the most of their opportunity on the big stage. They were staring down the barrel in the semifinal before they got help from above.

The Dolphins, last year's finalists, won the toss and opted to bowl but it was the Knights on a slow wicket who played clever, resourceful cricket, stepping on the gas when they needed to and easing off when the stakes were too high.

This was particularly evident in the opening overs as they were happy to see off the competition's premier wicket takers Daryn Dupavillon and Ottniel Baartman.

They had, after all, lost Raynard van Tonder who fell to the fourth ball of the match when he clipped the ball to short fine leg.

The last over of the power play proved eventful.

It started ingloriously for bowler Thando Ntini who set off with a wide but the over ended with the wicket of the in-form Rilee Rossouw. In between however Ntini went for a six and two fours and he hit Rossouw on the front of the helmet before claiming his prized scalp, albeit fortuitously. Rossouw was concussed and after he, like Van Tonder, fell to a catch at short fine leg, he took no further part in proceedings.

Ntini, who conceded 46 in three overs, continued to pitch short and conceded 19 runs in his next over with Piet van Biljon in particular taking a shining to what was on offer.

Van Biljon in concert with Patrick Kruger (61 off 53 deliveries) continued to accelerate.

Van Biljon eventually clobbered 42 off 25 which earned him the batsman of the match award, but he promptly handed the R1,500 prize money to Kruger.

The vastly experienced Farhaan Behardien typically kept a level head at the end of the innings. He helped himself to an unbeaten 29 off 18 balls as the Knights finished strongly.

Their 176/5 was always going to be a tall order and quick Migael Pretorius duly pegged them back. He earned the bowler's award claiming 2/30 in his four overs and was well supported by Alfred Mothoa.

The Dolphins will rue several opportunities in a match marked by atrocious fielding. The Knights however, didn't let this one slip.

“It has been a tough few years,” said Van Biljon. “We had some deep waters to go through. We finished last last year in this competition. We struggled to find an identity, the way we wanted to play. These guys all bought in this year.”

Ahead of SA’s opening match against Australia, Pat Cummins says bowlers will need to mix it up on the slow pitches
Sport
6 months ago