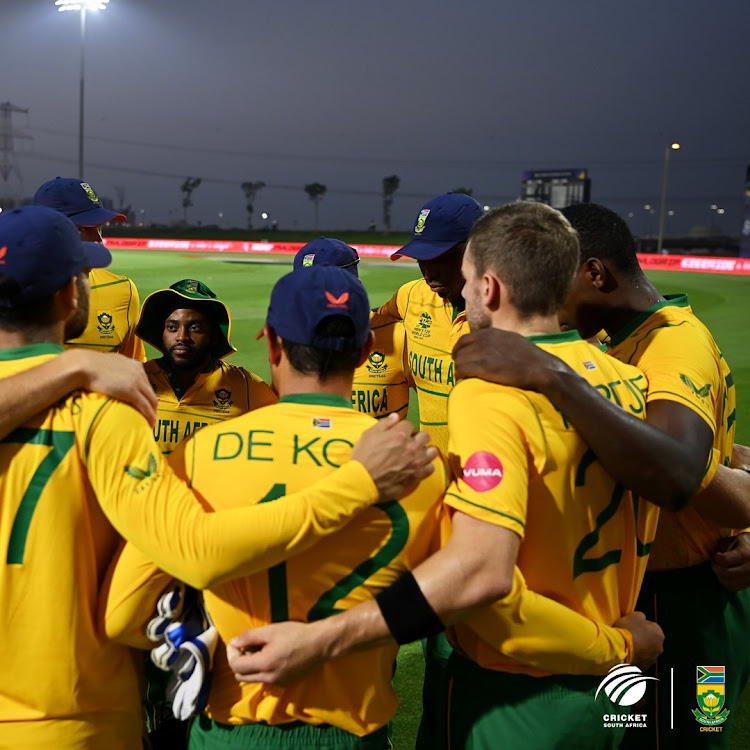 Rassie van der Dussen smashed his maiden T20 career international century as he almost single-handedly steered SA to a win by six wickets over Pakistan at the Tolerance Stadium in Abu Dhabi on Wednesday evening.

Van der Dussen walked in at number three with the Proteas on 15/2 after three overs and scored at a strike rate of 198.03 as he stroked 10 boundaries and four sixes to remain unbeaten on 101.

But the Proteas' impressive win was marred by an injury scare to Tabraiz Shamsi ahead of Saturday’s T20 World Cup opener against Australia in Abu Dhabi in the United Arab Emirates.

Shamsi, the number one T20 bowler in the world, bowled four balls of his first over before he felt tightness in his groin in the 10th over.

The canny Shamsi walked off the field with his head down and after assessment the medical team decided that the key leg-spinner sit out the remainder of the match.

The team’s media officer said the medical team will assess Shamsi overnight and determine the next steps to be taken, with the Proteas set to tackle Australia at the Sheikh Zayed Stadium on Saturday at 2pm SA time.

Kagiso Rabada has said South Africans can expect the Proteas to fight tooth and nail during the T20 Cricket World Cup in the United Arab Emirates and ...
Sport
10 months ago

Proteas captain Temba Bavuma won the toss and put in Pakistan to bat first and the SA bowlers had a decent start by restricting the scoring to 36/2 after the first six powerplay overs.

Pakistan openers skipper Babar Azam [15 off 12] and Mohammad Rizwan [19 off 19] got starts but failed to kick on as SA somewhat put the brakes on.

But Fakhar Zaman had other ideas. The left-hander sprayed fives sixes and two boundaries in the 28 balls he faced before he retired out on 52.

Veteran Mohammad Hafeez came in and scored 13 from 14 runs but as soon as he was out, dismissed by Keshav Maharaj in the next ball after Shamsi walked off the field at the half way, Asif Ali [32 off 18] and Shoaib Malik [28 off 20] lifted Pakistan to 186/6 in the 20 overs.

Kagiso Rabada led the way with three wickets for 28 runs in his four overs and was assisted by fellow fast bowler Anrich Nortjé and spinner Keshav Maharaj taking a wicket each.

The Proteas opened with Quinton de Kock [6 off 8] and Reeza Hendricks [7 off 8] and did not get off to the brightest of starts in their reply as they were both deceived by the orthodox left-arm spin of Imad Wasim in the third over.

Bavuma walked in at number four with SA in a spot of bother on 15/2 and steadied the ship together with Van der Dussen.

The score was 122 before the fall of the next wicket when the captain Bavuma was dismissed for a patient and match rebuilding 46.

Van der Dussen continued to score with minimal risk and was assisted by Heinrich Klaasen [14 off 8].

Paceman Mitchell Starc has warned Australia's rivals not to read too much into the team's recent poor form, saying the squad now assembled in the ...
Sport
10 months ago

When Klaasen was bowled the Proteas needed 30 off the last 10 balls as they pushed for victory against a strong Pakistan side that bamboozled T20 World Cup defending champions the West Indies to lay down the marker in the previous warm-up match.

Van der Dussen scored the winning runs with David Miller unbeaten at the other end [8 off 3].

The Proteas convincingly beat Afghanistan in their first warm-up match on Monday and the victory over a strong Pakistan side will boost their confidence ahead of a confrontation with Australia in their opening World Cup assignment.

The Proteas will play the West Indies on October 26 in Dubai and against two yet to be determined qualifiers on October 30 and November 2 before a confrontation with England in Sharjah on November 6.

Free State Cricket CEO Johan van Heerden has admitted that the union made young black cricketers to stay in an old stadium gymnasium under the stand ...
Sport
9 months ago

KZN Cricket CEO Heinrich Strydom came under sustained questioning as he attempted to offer a response to Roger Telemachus’ claims that he was ...
Sport
9 months ago

Johan van Heerden, the CEO of Free State Cricket in Bloemfontein, has denied allegations of racism made by former Knights and Proteas leg-spinner ...
Sport
9 months ago

Former leg-spinner Eddie Leie, who alleged he suffered depression as a result of discrimination and racism he experienced during his time in the Free ...
Sport
9 months ago

Cricket SA (CSA) will be the first federation to welcome fans back into stadiums for domestic matches after the organisation announced on Sunday that ...
Sport
10 months ago