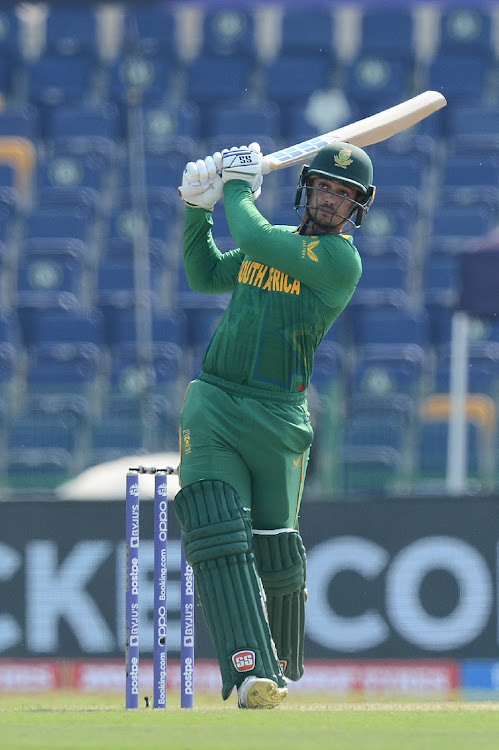 Quinton de Kock has made himself unavailable for the Proteas against the West Indies.
Image: Isuru Sameera Peiris

The Cricket SA (CSA) board will wait for a report from the Proteas management before deciding on the next step after Quinton de Kock withdrew from the team to face the West Indies in the ICC T20 World Cup on Tuesday as he did not want to take the knee.

On Monday morning, CSA released a statement requiring all the Proteas team members to take the knee during the remaining the T20 World Cup matches in the United Arab Emirates (UAE).

Shortly before the start of play at the Dubai International Stadium on Tuesday morning, team management announced that De Kock, who is a crucial member of the team as opening partner to captain Temba Bavuma and wicketkeeper, made himself unavailable due to personal reasons.

De Kock’s place at the top of the order was taken by Reeza Hendricks, who opened with Bavuma, while Heinrich Klaasen assumed the responsibilities of keeping wickets behind the stumps.

In response to De Kock’s move of making himself unavailable, CSA said they have noted his decision and the next move will be determined by the report from team management.

“Cricket SA (CSA) has noted the personal decision by SA wicketkeeper Quinton de Kock not to “take the knee” ahead of Tuesday’s game against the West Indies,” reads the CSA statement.

“All players had been required, in line with a directive of the CSA board on Monday evening, to “take the knee” in a united and consistent stance against racism.

“This is also the global gesture against racism that has been adopted by sportspeople across sporting codes because they recognise the power of sport to bring people together.

“After considering all relevant issues, including the freedom of choice of players, the board had made it clear it was imperative for the team to be seen taking a stand against racism, especially given SA’s history.

“The board’s view was that while diversity can and should find expression in many facets of daily lives, this did not apply when it came to taking a stand against racism.

“The board will await a further report from team management before deciding on the next steps. All players are expected to follow this directive for the remaining games of the World Cup.

“CSA thanks all other Proteas players for agreeing to unite and make such an important public stand against racism.”

The board of Cricket SA (CSA) has taken a drastic but welcome stance and ordered all Proteas team members to take the knee in their remaining T20 ...
Sport
6 months ago

If the millions of cricket-mad South Africans who cannot afford a pay TV subscription thought it was a horrible mistake that was not to be repeated ...
Sport
6 months ago

SA started their ICC T20 World Cup campaign on a disappointing note after they lost to Australia by five wickets at the Zayed Cricket Stadium in Abu ...
Sport
6 months ago