Australia snare Root to close in on Adelaide test victory 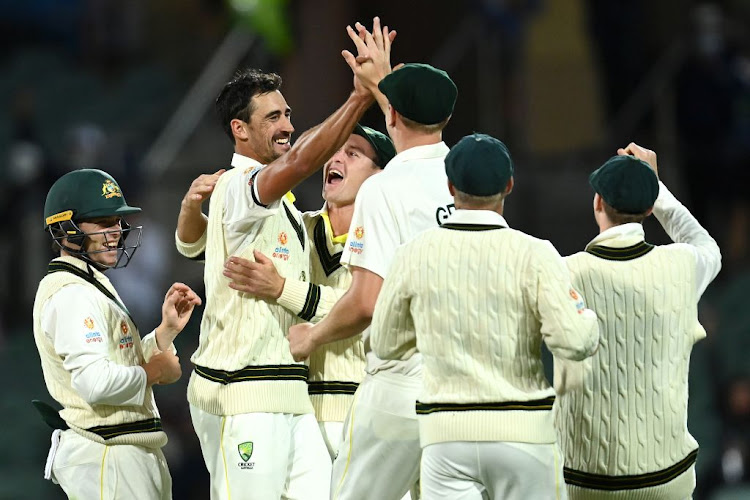 Mitchell Starc of Australia celebrates with team mates after taking the wicket of Joe Root of England for 24 runs during day four of the Second Test match in the Ashes series at the Adelaide Oval on December 19, 2021
Image: Quinn Rooney/Getty Images

Mitchell Starc removed England captain Joe Root with the last ball of day four to put Australia firmly on course for victory in the second Ashes test at the Adelaide Oval on Sunday.

Australia declared their second innings on 230-9 before the tea break, setting England an improbable victory target of 468. The touring side were 82-4 at stumps, losing Root in the final over and staring at a second successive heavy defeat in the five-match series.

Ben Stokes, whose batting heroics secured England’s most successful Ashes run chase at Leeds two years ago, was on three with his team still 386 short of their target.

Australia showed their intent by removing opener Haseeb Hameed for a duck before tea and sent back Dawid Malan, who made 20, after the break.

England settled briefly as Rory Burns, who had managed 17 runs in his three previous innings on this tour, held firm before departing for 34, caught by Steve Smith in the slips off a Jhye Richardson lifter.

Starc floored Root with a painful blow to his abdomen before dismissing the England captain to cap another satisfying day for Australia.

Earlier, Marnus Labuschagne followed his first innings century with a fifty and Travis Head made 51 as Australia declared on 230-9 half an hour before the tea break. England claimed three wickets in the first session but Labuschagne and Head settled any nerves in the Australia camp before stand-in captain Smith declared.

West Indies hold the record for the highest successful fourth innings chase of 418 achieved against Australia in 2003.

England’s most successful Ashes chase came at Leeds two years ago when they reached their 359-run target thanks to Stokes’s superb century.

It took 12 balls for an English wicket to fall with Richardson removing Haseeb Hameed caught behind for a duck. Starc was treated for a back injury incurred while batting but showed no ill-effects.

Stokes temporarily took over England captaincy as Root had a hospital scan after being hit in the abdomen during Sunday's warm-up and he limped off the field after his dismissal to complete a depressing day for his team.

India opener KL Rahul has been named vice-captain for the three-Test series against SA after Rohit Sharma was ruled out of the tour due to injury, ...
Sport
6 months ago

The West Indies tour of Pakistan has been cut short after the number of Covid-19 cases in the touring party increased to nine.
Sport
6 months ago

SA start their three-Test series against India at Centurion next week without spectators and with lingering questions over the suitability of coach ...
Sport
6 months ago