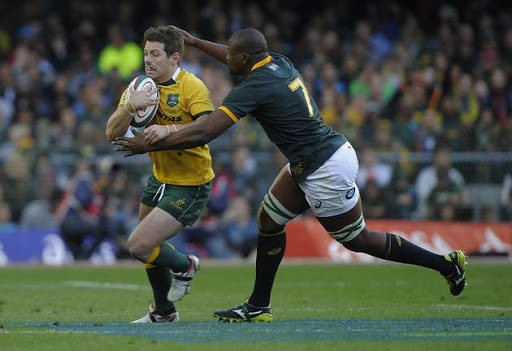 Jean-luc du Preez ascension to the Springbok squad is a nod to what he could provide in the future but Teboho “Oupa” Mohoje will ask questions of him in the short to mid-term.

It's no secret the twin son has thrived in the environment his father Robert has set out at the Sharks.

It's not often that you have your father as your professional coach‚ which has its pros and cons.

Clearly‚ Jean-luc has benefitted from the former and looks set to become one of those tough as teak blindside flankers South African rugby regularly throws off the conveyor belts.

There's also the fortune of playing for a winning team‚ something that Mohoje hasn't had this season.

Mohoje has been a victim of the Cheetahs' inability to string together decent performances but that shouldn't detract from his quality as a player.

With the Springboks' poor showings last season despite the good form he displayed for the Cheetahs last year‚ Mohoje tried to stand out last year without much success.

It's one of those examples when a year is a long time in rugby.

From a defensive perspective‚ there's not much to choose between Mohoje and Du Preez.

The two percent difference in their tackle success rate doesn't seperate them much‚ even though the Sharks have been defensively sounder.

That's where Du Preez has stood out more than Mohoje even though he has missed 23 out of 131 tackles.

In the trench warfare area that is pillar defence tackling‚ you're bound to miss as many tackles as you make on a busy day.

With the strong tight forwards the French possess‚ you're bound to put in a busy defensive shift.

On the other hand‚ Mohoje has missed 20 out of 133 tackles‚ which is a decent average in a defensively flaky team like the Cheetahs.

It is in the attacking stats where Du Preez trumps Mohoje and probably made Springbok coach Allister Coetzee and company look in his directing.

The last stat ties in with the better balanced game the Sharks employ but also a spatial awareness not always associated with South African loose-forwards with Siya Kolisi‚ Warren Whiteley and Jaco Kriel being the exceptions.

While Mohoje has played against the stronger New Zealand sides who haven't allowed him as much space as compared to the far more generous Australian sides‚ Mohoje has managed 481 meters from 77 carries with three tackle bursts and eight offloads.

With the right game plan employed‚ it's clear these two could thrive but both have yet to be tested in conditions where their close-quarter physicality will be tested.

Due to some selectorial confusion last year‚ Mohoje wasn't employed against England and Wales where he could have staked a decent claim in different conditions.

With Coetzee known to be conservative‚ it wouldn't come as a surprise if he would opt for the 15-capped Mohoje ahead of the greener Du Preez who has only one cap to his name.

One thing is for certain‚ the performances from Mohoje and Du Preez will give South Africans an indication of how life will be when Vermeulen finally decides that representing the Boks is not worth it.

It could also settle the debate over the necessity for overseas-based Boks with the 30-cap limit in place.

Coetzee has already shown his hand with the picking of three‚ an incentive if there ever was one for players to remain in South Africa despite the financial security offered by playing in Europe.

How this internal battle will pan out will have an impact on the blindside position going forward.