Sexton and pack lead Ireland to win over Australia 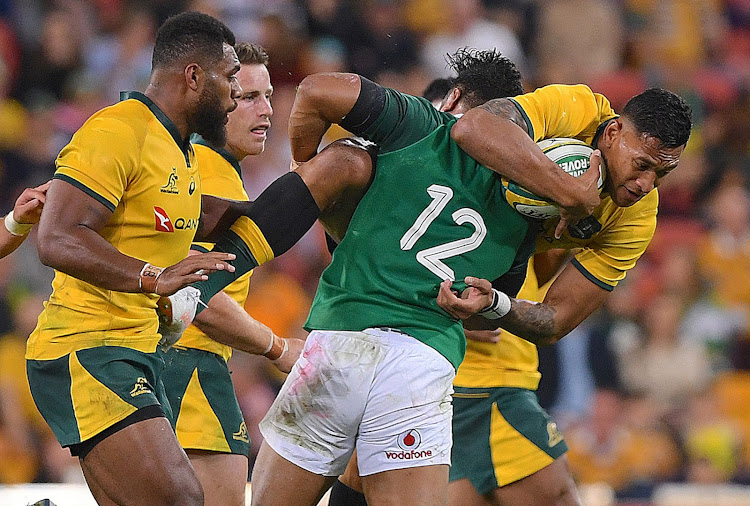 Flyhalf Johnny Sexton and a fired-up pack sparked Ireland to a clinical 26-21 victory over Australia in their second test in Melbourne on Saturday and kept alive their chances of winning the three-test series in Sydney next week.

Sexton combined with scrumhalf Conor Murray to run the attack as they slotted 16 points with the boot to give Ireland their first test win in Australia since 1979.

Winger Andrew Conway and tighthead prop Tadhg Furlong also crossed for the visitors, who were beaten 18-9 last week in the first test in Brisbane.

The home side were rarely in the match as Joe Schmidt’s team controlled the ball and dominated territory but still scored three tries to Kurtley Beale in the second minute, Taniela Tupou in the 78th and a first-half penalty try.

“Last week they taught us a few lessons,” Ireland captain Peter O’Mahony said. “We knew how good we had to be today and it has taken one of the best performances of our year to beat them.”

Schmidt had made eight changes to the side that lost the first test and the difference showed.

Apart from the opening two minutes when Beale ran a superb line after Bernard Foley had drifted across field and opened up the gap inside, the Wallabies were rarely in the match as the visitors dominated territory and possession.

They were also clinical, exploiting Marika Koroibete’s yellow card to score 13 unanswered points through Conway’s try and two Sexton penalties. Prop Cian Healy, however, was yellow carded by Paul Williams for bringing down an attacking rolling maul that also cost the visitors a penalty try.

The home side were unable to exploit their man advantage and spent much of the 10 minutes continuing to defend and were lucky to go into the halftime break only trailing 16-14.

That pattern continued in the second half as Ireland controlled the ball, while on the few occasions they were forced to defend they drove runners back in the tackle and shut down their time and space.

The Wallabies’ defence finally cracked when Furlong smashed over, just minutes after winger Keith Earls had a try ruled out for losing control of the ball while grounding it.

Tupou scored Australia’s third try after Jack McGrath was sin-binned for a professional foul to give them hope of sneaking a victory they really did not deserve.

“We had no ball. It’s tough to win a game like that,” Australia captain Michael Hooper said. “We know the Irish are very disciplined and they made it very tough for us.

“I thought they played a good pressure game and got the better of us.”

An early red card to France fullback Ben Fall ensured the All Blacks sealed a 26-13 victory in the second test at Wellington Regional Stadium on ...
Sport
3 years ago

Boks have to be wary of England backlash in Bloem

Bok legend Andre Venter looked like a man on a mission when he wheeled into the lobby of the South African team hotel on Friday.
Sport
3 years ago