Dobson to replace Fleck as Stormers coach in 2020 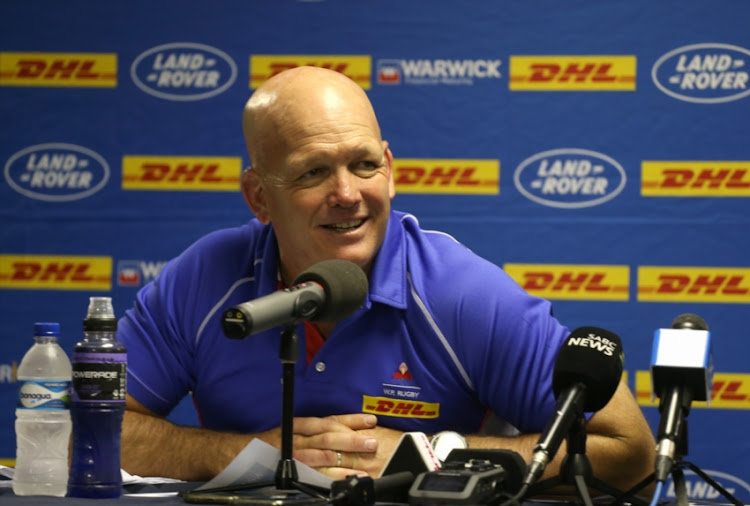 Dobson‚ who led Western Province to the 2017 Currie Cup title and is currently assistant Stormers coach‚ will replace Robbie Fleck next season.

Fleck‚ who was parachuted into the job when Eddie Jones jilted the Stormers less than a week into his tenure as head coach in late 2015‚ will see out the remainder of his four-year contract.

Former Stormers assistant coach Paul Treu‚ who has been at the centre of a power struggle with Director of Rugby Gert Smal and the union’s Board‚ has been redeployed in a newly created position.

The unpopular Treu‚ who made claims of discrimination and being undermined during his time as Stormers defence coach between 2015-18‚ has been named ‘Performance and Innovation Manager’.

Whatever that is.Treu’s complaints were independently investigated and later dismissed‚ which resulted in the bulk of the player body calling for his dismissal.

Treu is currently overseas on a development programme where has spent time at Manchester United among other sporting clubs.

Bad timing of bye for Stormers

Byes are always an issue in Super Rugby as they often seem to come at the wrong time for most teams‚ and for the Stormers that is certainly the case ...
Sport
2 years ago

Current Director of Rugby Smal will vacate his post at the end of March and not see out the remainder of his contract‚ which expires on October 31.

Treu has clearly won that battle‚ although he has not been given the same title as Smal.

Current Stormers coach Fleck and High Performance Manager Greg Hechter will fulfil Smal’s role in the interim while New Zealand assistant coach Paul Feeney will join Fleck on the conveyor belt out of Newlands after the 2019 Super Rugby competition.

Both Fleck and Dobson will work closely with Western Province Rugby Group CEO Paul Zacks and Hechter to build a strong playing squad for 2020 and beyond.

The contracting of players for next season will begin once the new SARU contracting model parameters have been finalised.

“In addition to ensuring the Stormers’ success on the field‚ one of Dobson’s key focus areas will be driving transformation in the Stormers’ future coaching and management teams‚” Zack said.

"There is a clear succession and development plan now in place and the opportunities created within the new structure will put us in a stronger position going forward.

”Zacks thanked Smal for his contributions to Western Province Rugby through the years.

"It has been an absolute privilege to work with Gert Smal who has played such a big role here at WP both on and off the field for many years and he leaves with our very best wishes for his future‚” he said.

Sharks lock Hyron Andrews may be getting better at his craft but knows that improvement will make him an even better player for his team.
Sport
2 years ago

Smal commented: “I would like to say thank you to the CEO and the Board for entrusting me over the years as Director of Rugby at Western Province.

"The decision to leave was not taken lightly. I wish only the best to all the coaches‚ the players and all the employees at WP and hope and trust that the franchise will go from strength to strength.”The experienced Jerome Paarwater has been appointed as the new Western Province Head Coach for the SuperSport Rugby Challenge and will be supported by Nazeem Adams (Assistant Coach - Backs)‚ Rito Hlungwani (Assistant Coach - Forwards)‚ Chris October (Defence Coach)‚ Naasier Parker (Strength and Conditioning Coach)‚ Elliot Hanabe (Technical Analyst) and Team Manager Cassiem Barnes.