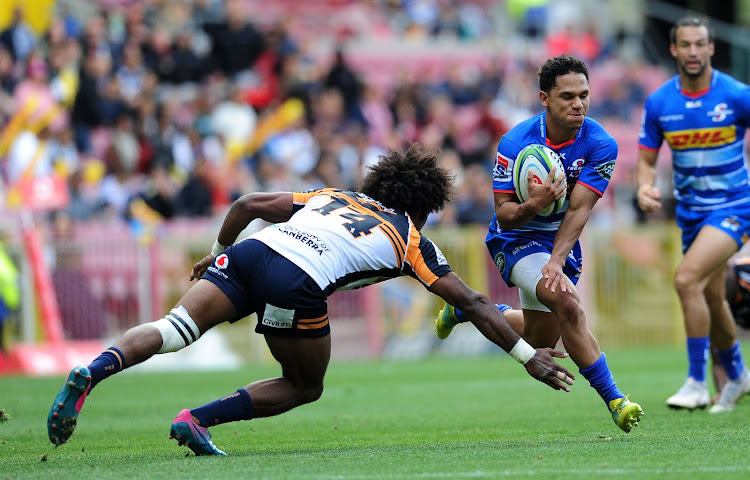 Herschel Jantjies of the DHL Stormers goes past Henry Speight of the Brumbies during a Super Rugby game at Newlands Rugby Stadium in Cape Town on April 20 2019.
Image: Ryan Wilkisky/BackpagePix

In a space of a week the Stormers went from the sublime to the ridiculous as they slumped to devastating 19-17 defeat against the Brumbies at Newlands.

Last weekend they produced a slick and clinical performance to beat the Rebels in Melbourne and eight days on, they stumbled and fumbled their way to a loss that has surely killed off any home play-off hopes.

There is still time to reach the post-season but in truth, what the Stormers dished up on Saturday, isn’t worthy of play-off rugby.

Despite having to make 275 tackles in a heroic defensive effort, and having 30% possession and 34% territory, the Brumbies outscored the Stormers by three tries to two.

As good as the Brumbies were on defence, the Stormers made it easier for them by being more predictable than a ‘knock-knock’ joke on attack.

They used one-off runners and when they went wide, it was acres behind the advantage line. The Brumbies had to make their tackles, but the Stormers ran themselves up blind alleys.

The Stormers’ spurned several kickable penalties and when they finally aimed one at the posts, flyhalf Josh Stander skewed it horribly wide. It summed up their afternoon.

After dominating a scrappy first half in almost every way but on the scoreboard, the Stormers went into the break with something to show for their efforts thanks to a penalty try.

Brumbies wing Toni Pulu’s desperate high tackle on Herschel Jantjies five metres from the try line was initially ruled legal after the Stormers scrumhalf lost the ball when he hit the ground.

Referee Nick Bryant blew for halftime, but either saw a replay, or was informed about the infringement.

With half the Brumbies team down in Newlands’ bowels, they had to return to the field only to see a penalty try awarded to the Stormers and yellow card given to Pulu.

While Pulu was off the field the Stormers added a second try through tight-head Wilco Louw early in the second half, to lead for the first time.

But it was short-lived as fullback Tom Banks scored to add to first half tries from No 8 Pete Samu and lock Rory Arnold.

Both first half tries came in the opening 10 minutes, which immediately put the Stormers on the back foot.