Bok coach Erasmus ahead of Japan showdown: 'We definitely know we are in for a big game' 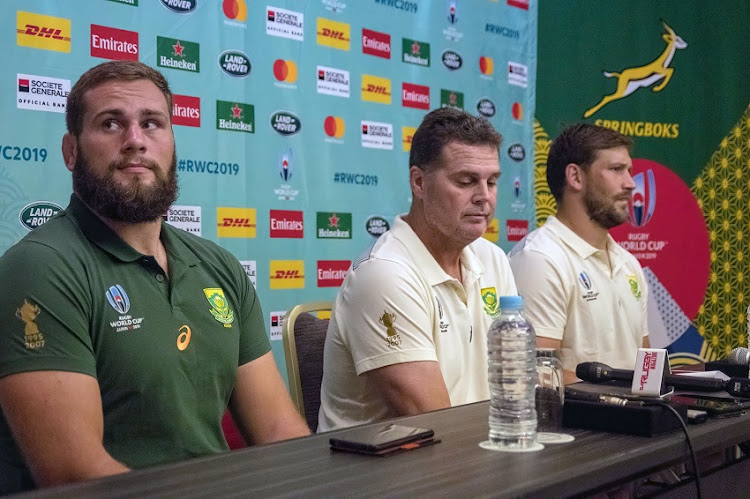 Rassie Erasmus is naturally drawn to the shadows.

If the Springbok coach had his way for the knockout stages at this Rugby World Cup (RWC) he would have his players return to sleepy Omaezaki‚ away from temptation and indeed the glare of the media.

On Monday‚ however‚ after his team arrived in the capital from Kobe‚ Erasmus was left under no illusion that his team is at the business end of the RWC and set for a date with destiny against the frenzy-filled hosts Japan.

The Brave Blossoms’ performances at this RWC is the talk of the town‚ and the country and Erasmus‚ even with the sturdy barrel-chested presence of Tendai ‘Beast’ Mtawarira next to him‚ felt the presence of a 40-odd‚ mostly local‚ media gallery.

“You can see Japan is excited about this and rightly so. Their team is doing well.

"We could feel the vibe.

"We definitely know we are in for a big game judging from all the people we see here‚” said Erasmus.

Knowing the week will probably get more demanding‚ if not daunting‚ and that his team may not be as feted as they were earlier in the tournament‚ Erasmus went on the charm offensive.

“It is tough not to like Japanese people‚" he said.

"If you look at the way they have accepted all the teams here. They have adopted us in each city we went.

"They put on South African jerseys and they make you feel special..... and I have never experienced this in my life before.

“The way they reacted to the typhoon and I know there is a lot of losses in lives and other ways.

"Our condolences to those people affected. Again it just showed the strength of the Japanese people to still host a game‚ and beat a team like Scotland.

“In saying that we are playing for our country and we are trying to win the RWC. Unfortunately Japan is the enemy for one week.

“We love the country‚ we love the people. We have to try and beat them.

"We will have to play really well to beat them. They are ranked sixth or seventh in the world and they deserve it. It is going to be a really tough game for us on Sunday.”

He has expected Japan to progress for some time.

“For us it wasn’t a big surprise for us‚" he said.

"After we played them in that friendly we knew we might play them in the quarters.”