Injury cloud follows Wales to Tokyo ahead of Bok clash 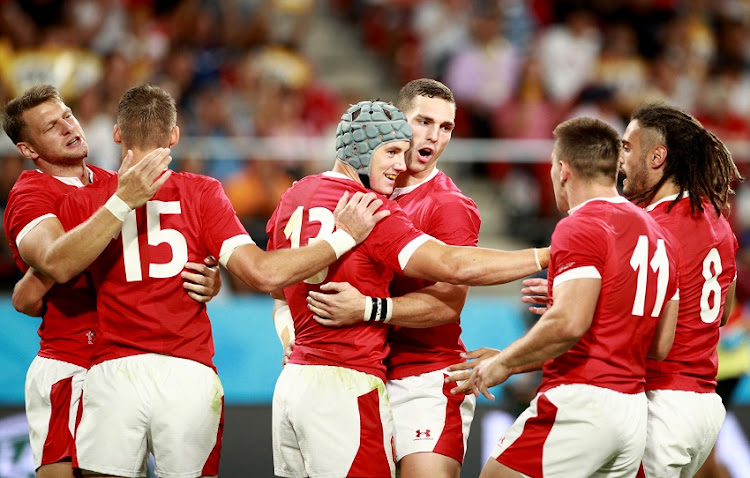 Jonathan Davies of Wales celebrates with his team mates after scoring his sides first try during the Rugby World Cup 2019 Group D game between Wales and Georgia at City of Toyota Stadium on September 23, 2019 in Toyota, Aichi, Japan.
Image: Adam Pretty/Getty Images

Wales arrived here to overcast skies in preparation for their Rugby World Cup semifinal against the Springboks on Sunday.

It doesn’t‚ however‚ compare to the injury cloud that has followed them for Oita.

Injured loose forward Josh Navidi is on his way home and will be replaced by wing Owen Lane. There is also doubt about the fitness of Jonathan Davies and Hallam Amos.

Wales had better be in tip-top shape as the Boks are likely to put them to a stern physical examination on Sunday.

The Boks manhandled the smaller Japan team in the quarterfinal and Wales will be well aware that the South Africans will want to assert themselves again come Sunday.

Wales’ defence coach Shaun Edwards is hoping the semifinal will be the toughest physical examination they face in this World Cup.

“You’re playing against a team like the Springboks who have huge forwards‚" Edwards said.

“It’s going to be a battle royal on that advantage line.

Wales found themselves backpedalling for large chunks of their quarterfinal against France.

"The fired up French looked set for a mildly surprising win before they typically reached for the self-destruct button.

“Is that your opinion?” Proudfoot demanded to know from his interrogator.

“I don’t think they played poorly.

"I think they are a formidable side‚ an unbelievable rugby side.

"They have great confidence in the way they play‚” said Proudfoot of a team that displayed none of those attributes in the quarterfinal.

“I think to say they played poorly is just an opinion.”

When he was reminded that Wales coach Warren Gatland had actually acknowledged that France was the better side on the day‚ Proudfoot noted: “France is an unbelievable rugby side.

"I don’t think anybody would have stopped them on that day.”

Wales did‚ however‚ dig deep to earn their right to play in the semifinals.

They may not have been at their best but they were able to scramble and their resilience kept them in the game.

Edwards wants them to dig deeper this weekend‚ particularly on defence‚ his area of expertise.

“We need to get back down to around the 14 points conceded mark‚ that’s where we were in the Six Nations‚" he said.

“If we can get back down to there‚ that will help us.

"You want to be in big games and there is no bigger than the World Cup final.”