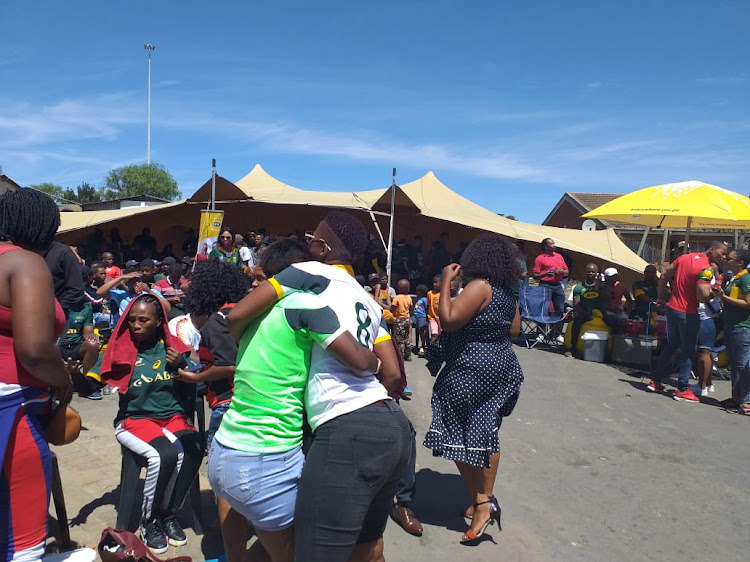 Scenes outside the tavern in KwaGqalane, just outside Port Elizabeth, on Saturday morning, as revellers awaited the kickoff of the 2019 Rugby World Cup final between the Springboks and England. The tavern was where Bok captain Siya Kolisi watched the 2007 World Cup final.
Image: Supplied

On the morning when Springbok captain Siya Kolisi readied to lead his team onto the field in Tokyo, a world away in the Eastern Cape township of Zwide, KwaGqalane’s tavern came alive.

As the Springboks prepared to kick off the 2019 Rugby World Cup final in the evening in Japan, at the tavern where Kolisi watched the Boks' last win in the tournament in 2007, revellers prepared to celebrate a local hero's attempt at another trophy.

The tavern, a popular haunt in the informal settlement just outside Port Elizabeth, was where Kolisi watched the 2007 World Cup final.

Kolisi hails from humble beginnings and would frequent the tavern to watch rugby because his family didn’t have a TV set.

The towering flanker was plucked from obscurity after his talent was noticed at a development rugby tournament when he was an under-12 rugby player.

He would move from the dusty field of Emsengeni Primary School in Zwide to the sprawling green lawns of Grey High School, a move that would set him on his trajectory to rugby stardom.

On Saturday the normally cramped tavern had moved outside into the open air, where a big screen had been erected.

Makhanda Street was completely shut down in a street party ahead of the final clash between Kolisi’s Springboks and the English red roses.