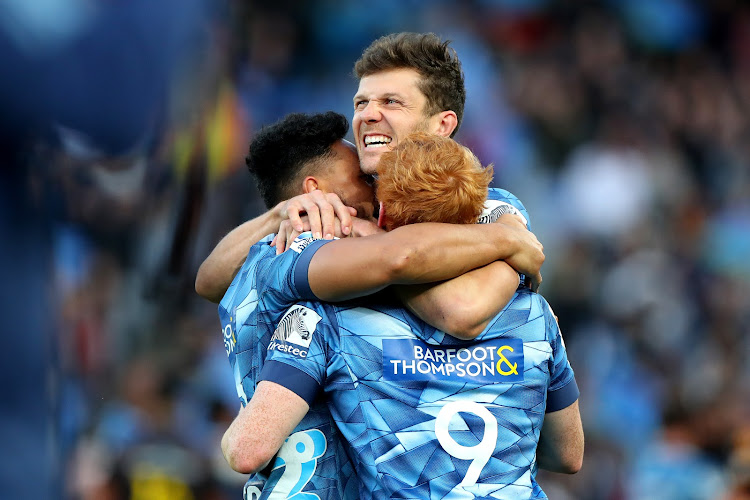 The Blues will go into their meeting with the Crusaders next week five points behind Scott Robertson's team, having played one game fewer.
Image: Hannah Peters/Getty Images

Otere Black claimed 19 points as the Blues cruised to a 39-17 win over the Highlanders at Eden Park on Sunday to pick up a second straight win at the start of the new Super Rugby Aotearoa campaign.

Black scored a try, two penalties and four conversions as Leon MacDonald's team secured a bonus point from a dominant display against the outclassed Highlanders to move into second place in the early season standings.

The Blues will go into their meeting with the Crusaders next week five points behind Scott Robertson's team, having played one game fewer.

Otago took an early lead through Josh Ioane's fourth-minute penalty, but before long the home side were imposing themselves on the game as they camped out in the Highlanders' half.

Black crossed the line in the 10th minute to score after Rieko Ioane burst through the Highlanders defensive line before offloading to his team mate for the try.

Caleb Clarke added a second for the Blues seven minutes later at the end of a flowing passage of play that saw Black move the ball out to Ioane, who released All Black Clarke to score.

Black added a penalty 12 minutes before the end of a half totally dominated by the Blues, who should have been further ahead by the time the hooter sounded.

The Highlanders' hopes were hit further with the loss through injury to Jona Nareki, who starred in Otago's win over the Chiefs last week, while Josh Dickson entered the sin bin in the dying minutes of the half to heap more pressure on Otago.

The Blues took advantage with Emoni Narawa crossing the line three minutes after the restart, with the replacement scoring out wide.

While Ash Dixon's try gave the Highlanders a glimmer of hope, a penalty from Black and a converted try by Akira Ioane 16 minutes from time put the result beyond doubt.

Folau Fakatava reduced the deficit with nine minutes still on the clock, but it was little more than a consolation for Tony Brown's team.

The new ‘Beast’: Matanzima’s path from Queen’s College to the Bulls

Promising Bulls loosehead prop Simphiwe Matanzima has shared his inspiring and eventful journey that took him from the Eastern Cape to Loftus to ...
Sport
1 year ago

The Reds coach Brad Thorn has described as "disappointing" reports that Wallabies forward Izack Rodda is on his way back to Australia less than a ...
Sport
1 year ago

Bulls coach Jake White is excited with the abundance of young talent at Loftus who are impressing in the SA Rugby Preparation Series.
Sport
1 year ago

The local rugby industry is already counting the cost of the Springboks potentially playing the British and Irish Lions in the United Kingdom later ...
Sport
1 year ago

Playing with 13 men after having two players red-carded, EP’s gutsy Elephants put up a brave fight before three late tries allowed the Lions to surge ...
Sport
1 year ago