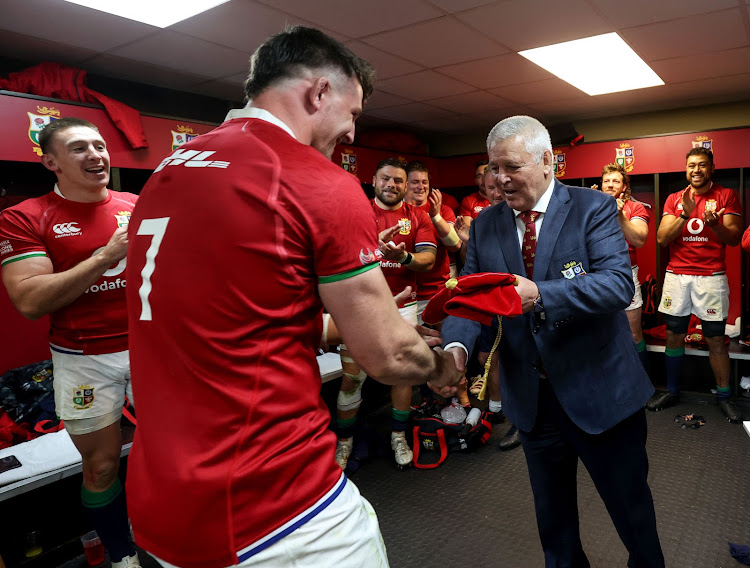 British & Irish Lions coach Warren Gatland says he hopes the test series against the Springboks can go ahead.
Image: @lionsofficial/Twitter

British & Irish Lions coach Warren Gatland is confident the Test series against the Springboks will still go ahead despite the challenges the Covid-19 pandemic has presented both camps.

In a day of high drama on Wednesday‚ the Springboks had to take the unprecedented step of cancelling their second Test against Georgia scheduled for Friday after 12 members of the camp, including management and players as well as four from the visitors‚ tested positive.

The British & Irish Lions tour match was also in danger of being cancelled after a player and a staff member tested positive ahead of their clash against the Sharks in Johannesburg on Wednesday night.

Gatland though remains sanguine about the Test series going ahead.

“I honestly believe we will have a Test series‚” said the Lions' coach.

“Our medics said in SA we are likely to get a case or two and it will be about how we deal with it.

“The players have been extremely vigilant. SA is probably in a worse situation than us.

“In the next couple of weeks we have the chance to get everyone right so that we can have a good Test series and make sure that we are safe and secure in our bubbles.

“That is what we've been trying to do.”

The coach said he does not know how the player and staff member contracted the virus.

“I don't know whether it is through hotel staff or some people passing by at the matches‚ or whatever.

“I'm not 100% sure. We are preparing and are excited for a Test series‚” he insisted.

Gatland delivered the upbeat tone after his side delivered another commanding performance to win their second game on tour.

This time they downed the Sharks 54-7 at Ellis Park but the match had been in doubt because of the positive Covid-19 results in their camp.

The kickoff of the match had to be delayed to allow the results of those who had close contact with the members affected to be returned.

Gatland was then forced into making eight changes to his match squad he had originally selected for the clash.

“It has been quite surreal and a real challenge considering the staff and players were in their rooms until 6 o'clock [on Wednesday].

“We didn't get the results back until half past five and then had to make a few changes.

“I'm incredibly proud of the performance of the players in how they adjusted and how hard the staff worked today.

“I came away from that today thinking more than the performance and the result.

“I'm very proud of the togetherness of the group‚ and how much they want to perform and play for the jersey.”

He believes the vicissitudes experienced on this tour will stand the Lions in good stead.

“My message to the players was 'let's use this as a positive'.

“Whatever is thrown at us we deal with it. Nothing will faze us. We were in a situation where we weren't in control of things.

“We talk about being in a situation of chaos and being able to adapt and change.

“That is what we did today (Wednesday) and the players were absolutely outstanding in their approach.

The British & Irish Lions were scheduled to play the Bulls at Loftus on Saturday but that match has been postponed because of a Covid-19 outbreak in the home team's ranks.

The British & Irish Lions tour of South Africa was thrown into jeopardy on Wednesday when a member of the Lions' tour management tested positive for ...
Sport
1 year ago

The Springboks’ second Test against Georgia has been cancelled because of Covid-19 infections in both camps.
Sport
1 year ago

Enforced late changes did little to break the stride of the British & Irish Lions who marched to their second consecutive win on their tour of South ...
Sport
1 year ago