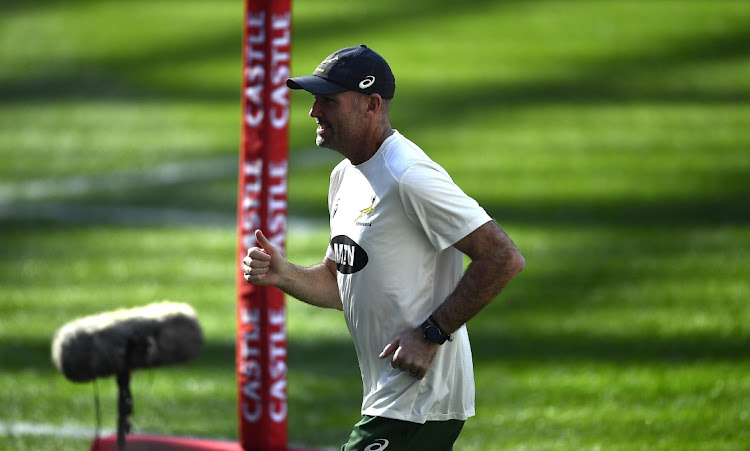 Springbok coach Jacques Nienaber will be determined for a series win against the British & Irish Lions.
Image: Ashley Vlotman

Springbok coach Jacques Nienaber's selection options were significantly trimmed as his SA 'A' team suffered a mildly embarrassing 17-14 defeat to the Bulls on Saturday.

To be fair‚ the all-conquering Bulls are a tight-knit group under Jake White and it showed in the second half as they overturned a 14-0 deficit into victory.

It has left Nienaber scratching his head ahead of this Saturday's opening Test against the British & Irish Lions in Cape Town.

“I wanted the guys to stake a say for selection for next week’s Test and unfortunately‚ not everyone did that‚ but I am not going to discuss individuals — any comments on them will be emotional‚ because we are hurting‚” said Nienaber.

“As a team‚ the performance was not there‚ and I blame myself for that as well. The lack of dominance from our pack was not what we had expected. With the late confirmation of the game‚ we also did not do any analysis on the Bulls and that showed‚ while I did expect a better set-piece platform.”

The 'A' team's line-out was a shambles‚ while the Bulls increasingly made gains on the deck as the match wore on. The Bulls were very much in the ascendancy for large parts of the second half.

This served to underline that the players under Nienaber's tutelage are in desperate need of game time. Injuries‚ Covid-19 and its cumbersome protocols will limit his options when he tries to assemble his team for the first Test.

“As there were places up for grabs in the Test team‚ we will do a proper review‚” he said.

“At the moment‚ we have two hookers out due to Covid-19 protocols (Bongi Mbonambi and Scarra Ntubeni)‚ and we needed to see what Joseph Dweba and Fez Mbatha can do.

“And another couple of players got some valuable game time — Damian (De Allende) played 60 minutes‚ Kwagga (Smith) 80‚ and Damian Willemse had another run at centre.”

Mbonambi and Ntubeni aren't the only players who have to bide their time.

Bok captain Siya Kolisi and Makazole Mapimpi are also doubtful starters next week‚ while Willie le Roux is on the cusp of being restored to fitness.

“We will look at physical readiness and consider Covid-19 protocols before we select our team and‚ in that regard‚ will be guided by our medical team.

“We will consider a number of factors before deciding to select players who have not played for the Boks in the last couple of years‚ like how long we have worked with them‚ their training stats and factors other like that.

“Some players who have been in our mix will slot back in more easily than others. But we will have a proper medical feedback session tomorrow so will make a call who will be in line for Test selection.”

Should Kolisi not be declared battle ready his place may well go to Marco van Staden but there is a school of thought that the speed of Kwagga Smith might fit the Bok bill better. Van Staden though‚ was peerless as a pilferer last season.

Malcolm Marx will start should Mbonambi not satisfy selection criteria‚ while S'bu Nkosi will be waiting in the wings in Mapimpi's now likely absence.

Nienaber will go into the final week of preparation wondering what can be done at the 11th hour to help ready his team for one of rugby's great challenges.

“We needed three games to get our ducks in a row before the Test series and we got that. The result was not what we had hoped for‚ but a number of questions were answered‚ especially with regards to the readiness of individual players and their readiness for selection.”

He may feel more emboldened about his first choice players. Problem is‚ how many will be deemed ready to play?

The price of keeping those involved with the British & Irish Lions tour from the clutches of Covid-19 might result in further losses for SA Rugby.
Sport
2 weeks ago

They have left it until the 11th hour but SA Rugby has confirmed SA A’s clash against the Bulls as part of a double-header at Cape Town Stadium on ...
Sport
2 weeks ago

The shadow Springboks made way for squad members on the fringes and judging from this performance many will remain on the margins.
Sport
2 weeks ago

The SA ‘A’ team will have a more fit-for-purpose look when they take on the Bulls at Cape Town Stadium on Saturday.
Sport
2 weeks ago

They were slow out of the blocks but by the time the final whistle sounded at Cape Town Stadium on Saturday the British & Irish Lions had thoroughly ...
Sport
2 weeks ago

The Blitzboks have all been released from quarantine with the exception of one person on the management team‚ SA team management said on Friday.
Sport
2 weeks ago