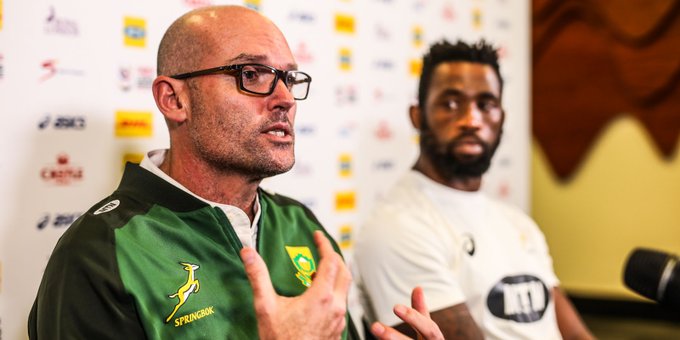 Springboks head coach Jacques Nienaber and captain Siya Kolisi will be hoping to turn things around in the second test.
Image: @Springboks/Twitter

The Springboks have built much of their preparation for this series against the British & Irish Lions by looking in the rear view mirror.

Their Rugby World Cup success was their point of reference and they may argue now that they've lost the first Test 22-17 they have more cause for their retrospective approach.

Now that the smart money is on them losing this Test series‚ they will need to invoke the belief and bloody-mindedness that saw them overcome even greater odds at the World Cup.

By losing their opening game then against New Zealand the Springboks under Rassie Erasmus needed to win every remaining game to lift the Webb Ellis Cup.

They did that with aplomb.

Though they have reassembled many of those 2019 heroes ‚their preparation for that tournament was forged over months of meticulous planning‚ repetition on the training field and match-day combat.

They were together for 19 weeks leading up to the final.

To turn things around this time round will require a far more concentrated effort.

Losing the first Test usually signals the death knell for teams in this matchup.

The vanquished in the first Test tend to spiral out of control and the Lions have not relinquished such a position of promise since their 2-1 defeat to Australia 20 years ago.

Springbok coach Jacques Nienaber was clear about what the team's obligations now are.

“We have to salvage this. A proper review is needed but we can sort this out‚ no doubt. It worked in the first half and I believe what happened in the second half is fixable.”

He will seek answers in his review and his inquest will likely pause on his team's efforts at the breakdown. They didn't maul effectively‚ they lost their first half traction in the scrum after the break and their overall discipline has also invited scrutiny.

They came off second best in the contestable kicking game. The Lions' scrumhalf Ali Price had the ball on a string in the second half.

“The kicking game was won by us in the first half and we got the rewards‚ but the second half was a different story‚” said Nienaber.

“They won that battle and it gave them territory‚ advantage in broken field play and we had to scramble‚ and could not cope.”

Nienaber said the Springboks' lack of height‚ especially on the wings was not to blame for their shortfalls in that area.

“No‚ it's not size. Cheslin Kolbe is good in the air.

“Cheslin got good rewards in the first half. There was a mix-up with Willie le Roux and Kwagga Smith but that happens. They will sort it out.”

Lamentably for the Boks the momentum of the match seemed to turn on the result of a contestable kick shortly after halftime when miscommunication between Smith and Le Roux brought about hesitation.

Smith was thumped in a tackle and the Boks were on the backfoot as they saw their 12-3 halftime advantage evaporate.

Though the hosts got over the try line from against the run of play incursions‚ they were ruled out by the officials‚ who seemed stretched to keep a handle on proceedings.

Nienaber was philosophical about those calls.

“Sometimes those inches go for you and you score a brilliant try. Sometimes they don't.”

Despite their handy lead at the break Nienaber then pointed at areas where trouble might be brewing.

“At halftime things were working for us.

“We were playing right areas of the field. We needed to step up at breakdown.

“We had to sort that out and also our discipline. They started mauling.

“We gave stupid penalties away. Our discipline wasn't great in the second half.”

Has the Currie Cup become a tasteless rugby stew?

Something peculiar has happened to the Currie Cup.
Sport
5 months ago

The echoing soundtrack in the cavernous Cape Town stadium after this long-awaited series finally got going last night was one of a thousand hits.
Sport
5 months ago

Boks promise to bounce back with fire and anger

The echoing soundtrack in this cavernous stadium after this long-awaited series got going last night, and was one of a thousand hits.
Sport
5 months ago

Boks vs British Lions: Expect vacancies in both sides after first Test

Given the physical demands the first Test is likely to place on the Springboks and the British & Irish Lions, those on the bench and on the fringes ...
Sport
5 months ago