‘We were outplayed in all areas’: Bok coach Jacques Nienaber 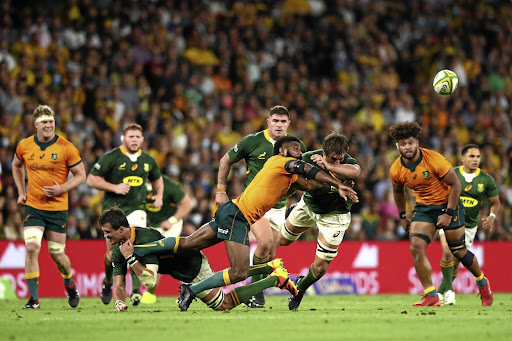 Marika Koroibete of the Wallabies offloads during The Rugby Championship clash against the Springboks at Suncorp Stadium in Brisbane on Saturday.
Image: Chris Hyde/Getty Images

Springbok coach Jacques Nienaber admitted after his team's disappointing 30-17 defeat to the Wallabies that they were outplayed in all areas during the Rugby Championship Test match between the two sides on Saturday.

After the back-to-back defeats to Australia, who won for the 10th successive time at the Suncorp Stadium in Brisbane, Nienaber described the performance as the Boks’ worst since 2018 when they lost to Argentina in Mendoza.

It doesn’t get any easier for the Boks as they will have to dust themselves off and be ready to face the rampaging New Zealand this weekend as they attempt to stay in contention in the competition.

“We were truly beaten in each department, and beaten hands down,” said a visibly disappointed Nienaber.

“We just made too many errors in every aspect of our game and we need to figure out quickly what went wrong as things don’t get any easier in the next two weeks.

“In the Rugby Championship, you get tested differently by each opponent and we came up short against Australia. [This] week will be another massive but different challenge, and we will have to try to turn things around. Win or lose, we have a review process anyway, and that will be done again.”

Nienaber also took time to apologise to Springbok supporters for the poor performance that he said was not worthy of the green and gold jersey.

“We were overpowered. We have not conceded four tries in a match since 2018 and [on Saturday]  we could not respond to the challenges put up by Australia,” he said.

Nienaber added that one of Australia’s four tries exposed errors in their defensive system and  the rest were down to poor defensive execution, while their kicking was also inconsistent.

“Guys missed tackles that they normally make. If every player in the team misses just one tackle, you will have 23 missed tackles and at times it felt like that was happening.

“We executed poorly and that led to points against us as well. We did create some opportunities, but the error rate just nullified that. This was an unheard-of performance today, to be honest,” said Nienaber.

“I would not say our plan is not working, it is just the execution of such that was very poor and should be implemented better. Training went very well this week, but today our error rate was just too high.

“Too many players were making mistakes. We normally are so good at defence, but today, we did not do well. We have to be better and pull tighter.”

Kolisi said they spoke about the Australian focus on attacking the breakdown at halftime, but still could not counter that.

“We knew it was coming and prepared for it, they just overpowered us today. We did not enforce as we planned, and we did not react to that. We need to take responsibility for this performance. It was just not good enough.”

The Springboks failed in their mission to register their first win in Australia since 2013 when they were thumped 30-17 by the Wallabies in their ...
Sport
4 months ago

Springbok assistant coach Mzwandile Stick has come to the defence of Handrè Pollard, who was heavily criticised for his poor kicking display during ...
Sport
4 months ago