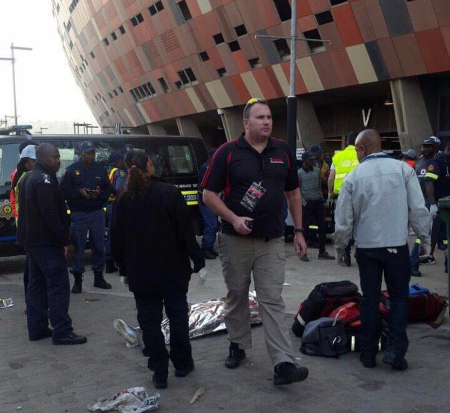 The scene outside FNB Stadium after the stampede that killed two people.
Image: via Twitter

A tragedy during the Soweto soccer derby between Kaizer Chiefs and Orlando Pirates at the FNB Stadium on Saturday in which two people were killed and 20 others injured was caused by fans without tickets trying to gain access to the stadium‚ Stadium Management South Africa said on Sunday.

“At approximately 15h10 yesterday‚ 20 minutes before the scheduled kick-off of the Annual Carling Black Label Cup at FNB Stadium‚ a small group of un-ticketed members of the public (meaning without match tickets)‚ despite the presence of members of the SAPS and private security‚ forced a number of emergency gates open in a rolling wave breaching the perimeter gates gaining illegal access to the Stadium‚” Stadium Management SA said in a statement. However‚ it dismissed claims of a stampede.

“One of the emergency gates that was forced open was between turnstile 14 & 15. It is our understanding that the VOC Commander‚ Lt Col Kraemer‚ was present at the scene at the time. As the gate flung open due to the pressure of these people pushing on the gate – chants of ‘push –push –push’ were heard by eyewitnesses – the people pushing at the front of the gate fell over and the people from behind literally clambered right over them‚ causing blunt force trauma injuries in doing so‚ therefore it will be incorrect in stating that this was a stampede as a stampede is a wild sudden mass panic of a number of people in the same direction‚” it stated.

It said that members of the VOC and stadium management staff who witnessed the incident‚ “at risk to their own well being‚ went to the assistance of those who had fallen over”. Medical assistance was immediately called to the scene and they responded‚ according to eyewitnesses‚ within 3-4 minutes.

“Unfortunately and sadly‚ and based on reports from the SAPS and the Stadium medical centre‚ 2 of the people who were trampled on succumbed to the blunt force trauma injuries they received after the gates were forced open. One other person has since been taken off life support and is now in a stable condition and 19 others have sustained minor injuries‚ of which a number has been discharged‚” the statement added.

Stadium Management said that in terms of the Safety at Sports and Recreational Events Act‚ 2010 (Act no 2 of 2010) (the Act)‚ an inter disciplinary public and private sector Event Safety & Security and Planning Committee‚ chaired by an authorised member of the SAPS‚ appointed by a delatee of the National Commissioner of Police‚ was established during May 2017 to plan for this event.

“No less than seven (7) ESSPC safety and security planning meetings and a series of‚ amongst others‚ ESSPC security and transport management sub-committee meetings were held‚ under the chairmanship and direction of the ESSPC chairperson‚ in the lead up to yesterday’s event. A properly and comprehensively documented ESSPC event safety and security plan was prepared for the event.

“In terms of the Act‚ a SAPS appointed VOC commander was the head of the Venue Operations Centre‚ the nerve centre of safety and security delivery at the event yesterday. As stated above‚ he was present at the scene of the incident yesterday‚ together with a number of other SAPS members and City of Johannesburg emergency officials‚ and is an eyewitness to what occurred at the emergency gate between turnstiles 14 & 15 today. The SAPS immediately took control of the scene of the incident and a full investigation is underway. SAPS have confirmed that an inquest docket has already been opened‚” Stadium Management said.

It added: “From a Stadium Management South Africa perspective‚ we are deeply shocked by the tragic events of yesterday and our deepest sympathy goes out to the families of the deceased and those who have been injured.”

The stampede at FNB Stadium that led to the death of two people was allegedly caused by fans with fake tickets and those without any tickets who ...
Sport
5 years ago

Gauteng Community Safety MEC Sizakele Nkosi-Malobane says he is confident law enforcement agencies will work around the clock to investigate the main ...
News
5 years ago