Mosimane likens Downs' draw with Chiefs to a Mayweather fight 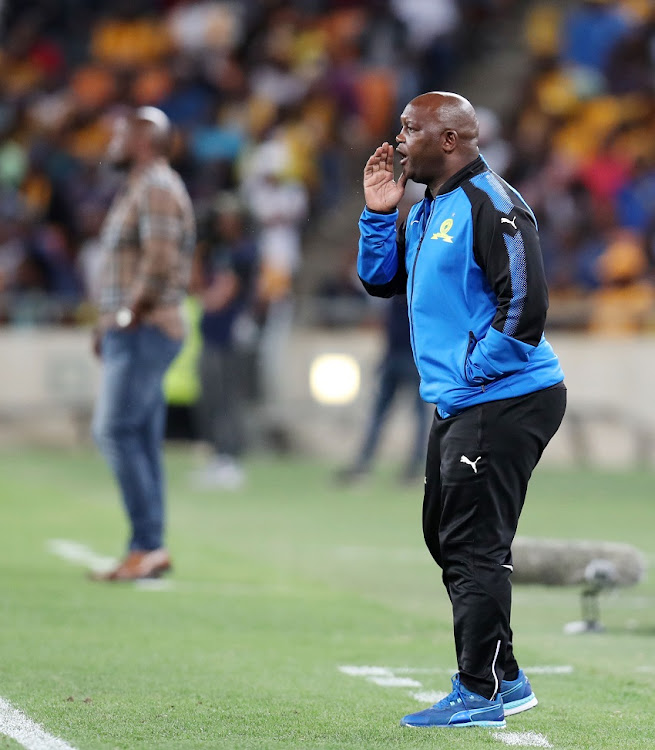 Kaizer Chiefs dominated the game‚ but once the final whistle had gone one could not help but feel that it had in fact been Mamelodi Sundowns who had been more on control of proceedings in the 0-0 Absa Premiership draw on Saturday night.

Sundowns coach Pitso Mosimane had said he would be happy with a point.

A circumspect Downs played out of character‚ and boxed very clever at FNB Stadium.

Downs sat deeper‚ played the counterattack instead of the high press‚ which meant they opened far less at the back‚ and frustrated Chiefs - who would have been looking for opportunities from their own effective quick counter.

Mosimane can take credit for seeing the bigger picture of the title challenge.

Downs' first objective was not to lose‚ which would have thrown open the race.

Sundowns preserved a five-point lead over one of their biggest challengers.

That's tactical cleverness for you.

Even the 70 000 crowd - the biggest in the PSL this season - must surely have appreciated such gumption‚ even if it made the game marginally less of a spectacle‚ if still highly competitive and absorbing.

"For me‚ it's just to show respect to Kaizer Chiefs.

"And also‚ sometimes I look at (Floyd) Mayweather fighting‚ and he doesn't have to be going toe-to-toe with everybody.

"But he retired undefeated. So is he a good boxer?‚" Mosimane said afterwards

"So tonight‚ we were there. The year before last‚ when we won the league‚ we went to Cape Town and played Ajax.

"Ajax were all over us. It was the third-last game.

"We had Chiefs after Ajax. And at half time I said to the guys‚ 'You see this game. If you are going try to fight with (or take the game back to) Ajax‚ are you the better team on the day?'

"We took a point. After that we beat Chiefs in the next match. We only had to beat Tuks to win the league.

"So if I had fought with Ajax (and lost)‚ what was my guarantee that I would beat Chiefs?

"So for me it was a good tactical move and good decision.

"It might come back and bite me to get a draw against Chiefs.

"But you can't say that we didn't try to go forward and score.

"So sometimes you play it like that. Sometimes it's a different game.

"You saw Man City go to-to-toe with Liverpool and lose (4-3). I would have taken the point.

"It's not about you trying to win every game. I'm happy with the point.

"When we play Champions League we play like this. And that's why we've got a star on top of our badge."

Chiefs counterpart Steve Komphela was asked if Sundowns' approach was a compliment to his team‚ and sign of Amakhosi's improvement in the past few months.

"I thought‚ in fact‚ in any championship it's a marathon.

"And in-between you have to pace yourselves. Be very strategic in your manoeuvres‚" Komphela said.

"And you could hear from the coach's (Mosimane's) statement that in the bigger scheme of things he might have thought‚ 'Let me hold these ones‚ they are direct competitors. And as soon as I've gone past them it gives me an opportunity to go for the jugular with whoever'."

Sundowns could have snuck a win.

Chiefs dominated and Siphiwe Tshabalala hit the crossbar in the first half.

Soon after Gaston Sirino's 76th-minute introduction for Downs the Uruguayan laid on a pass that saw Percy Tau turn and hit the upright‚ Jeremy Brockie slamming the rebound onto the crossbar.

The end result of Sundowns' strategy is that they remain leaders with 35 points‚ second-placed Orlando Pirates‚ who beat Platinum Stars 2-0‚ and third-placed Chiefs‚ have 30 apiece.

Downs are sitting exactly where the want to be.

Mamelodi Sundowns are five points ahead at the top of the Premier Soccer League standings and will be the happier of the two after garnering a hard ...
Sport
3 years ago

Sundowns' talk of Chiefs being favourites is 'mind games'

Any talk from Mamelodi Sundowns’ camp that Kaizer Chiefs might be favourites in Saturday’s night’s big Absa Premiership clash at FNB Stadium is just ...
Sport
3 years ago