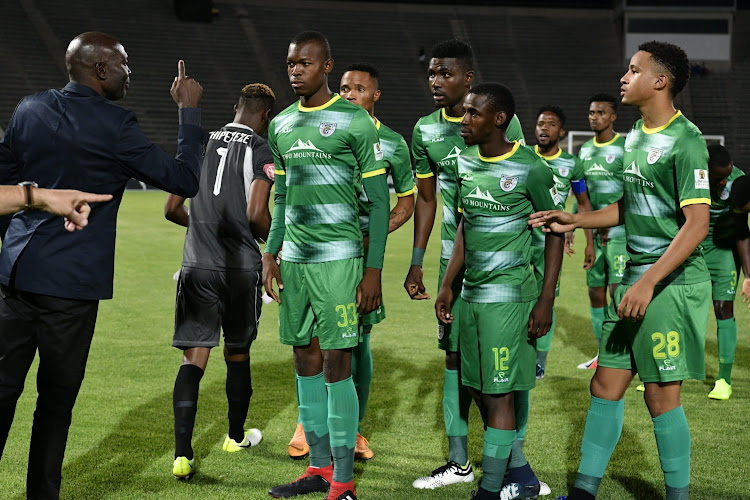 Baroka FC coach Wedson Nyirenda dishes out instructions to his players during the goalless Absa Premiership match away against Mamelodi Sundowns at Lucas Moripe Stadium in Atteridgeville, west of Pretoria, on December 11, 2018.
Image: Lefty Shivambu

Newly crowned Telkom Knockout champions Baroka FC remain stranded in the Absa Premiership relegation zone but coach Wedson Nyirenda is adamant that they will escape the quicksand in the next few months.

Baroka managed to collect a lone point in their goalless draw with Mamelodi Sundowns at Lucas Moripe Stadium on Tuesday to move from second from the bottom to eleventh spot on the log.

Nyirenda and his technical team have their work cut out for them as only two points separate Baroka and bottom of the log Black Leopards with two rounds of matches remaining before the halfway mark.

“We are not going to be relegated‚” the coach said confidently‚ adding that he was satisfied with the away point they gained in Atteridgeville.

“If you look at our game against Sundowns‚ you will realise that our players have matured.

Racism on the soccer field is in the spotlight once again.
Sport
2 years ago

"With a team boasting an average age of 24‚ we won the final and two days later managed to put up a fight against a formidable team like Sundowns.

"This tells me that we are getting somewhere.”

“It was not an easy game because Sundowns played a good game.

"They were organised and they dictated most of the match.

"But we tried to catch them on the counter attack and we could have got two in the first half but we missed.

"But‚ that is football and a point away from home is vital for us looking at where we are.”

Part of Baroka's mission is to end the season clear of the relegation zone and it continues on Sunday when they host Bidvest Wits‚ the same side they dumped out of the Telkom Knockout at the semifinal stage.

“We have played big teams recently and we did well‚" he said.

Kermit Erasmus is returning to the Premier Soccer League after Cape Town City added him to their squad‚ announcing his signing on Wednesday.
Sport
2 years ago

"The players have gained confidence.

"We are not so much worried because playing big teams is easier as you know what they do.”

After the Wits match‚ Baroka will end the year with a trip to Maritzburg United at the Harry Gwala Stadium.

But Nyirenda said he would need to manage his players very well.

“We just have to manage the players well until Sunday and beyond‚" he said.

"Wits are coming for revenge but it is not for me to say what we expect from them because I will be giving away some of our plans for the match.”