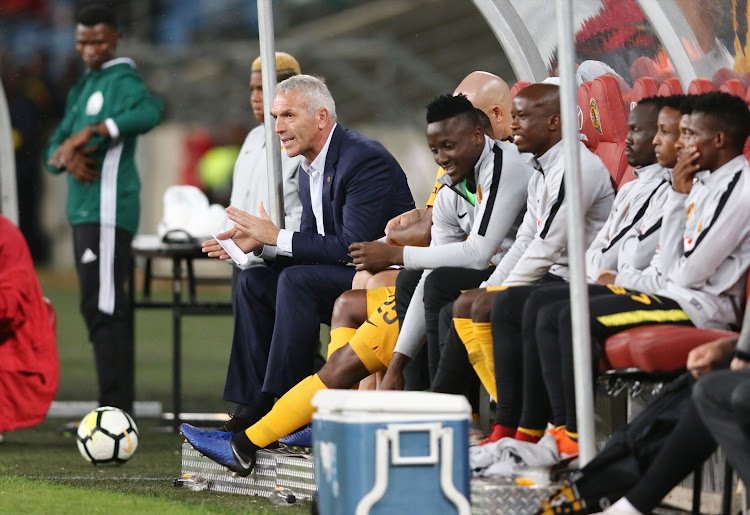 Kaizer Chiefs playing intensive games in midweek ahead of both legs of their Caf Confederation Cup playoff round tie against Zesco United played a role in a 5-2 aggregate defeat to the Zambian club‚ Amakhosi coach Ernst Middendorp has said.

Chiefs‚ aiming to reduce a 3-1 away leg deficit in the second leg at FNB Stadium on Saturday night instead succumbed to a 2-1 defeat in the round before the group stage.

Middendorp identified what he said were two high-intensity Wednesday night Absa Premiership games ahead of both weekend legs against Zesco as having made it difficult for Chiefs to perform at their best in the tie.

"It's not only tonight where you need to identify what to talk about for what happened‚" Middendorp said after the second leg on Saturday night.

"Of course‚ over the two games‚ if you observe what happened‚ it's a fully deserved qualification for Zesco.

"I think they haven't made any mistakes in terms of their defensive‚ and of course in attacking‚ when they had the possibilities to score they took their chances.

"I only want to refer to the work that we have to provide. If you take our first game in Ndola‚ three days before we had a really intensive game to play against team No 1 here in South Africa.

"We won it with an excellent performance against Bidvest‚ very clear‚ with no mistake in defence or attack.

"Then in the return game‚ three days before we had to play a very intensive game in Durban‚ travelling included.

"A performance where I would say probably not the same [level as against Wits]‚ but intensive. The weather was very heavy and the ground was one that you had to work hard on.

"In both cases‚ if you take the players‚ you can take examples.

"Hendrick Ekstein on Wednesday ran 13 kilometres‚ 2.3km intensive sprinting - I would say tonight he probably ran 10km‚ probably 800 to 900 metres sprinting. We will get the data.

"A young player like [Emmanuel] Ntiya-Ntiya‚ in both games - Wits and AmaZulu - was excellent.

"It's not making excuses. It's just mentioning the facts‚ really to understand why players are making mistakes‚ which they hadn't done three days before in both games."

In the 10th minute Ekstein was robbed of the ball just inside his half to allow Teddy Akuma to run through and shoot low from the edge of the area past Virgil Vries.

In the 69th Willard Katsande allowed a punt up-field to bounce‚ lost it to Lazarous Kambole and then recovered for the challenge‚ only for Jesse Were to sweep the loose ball past Vries.