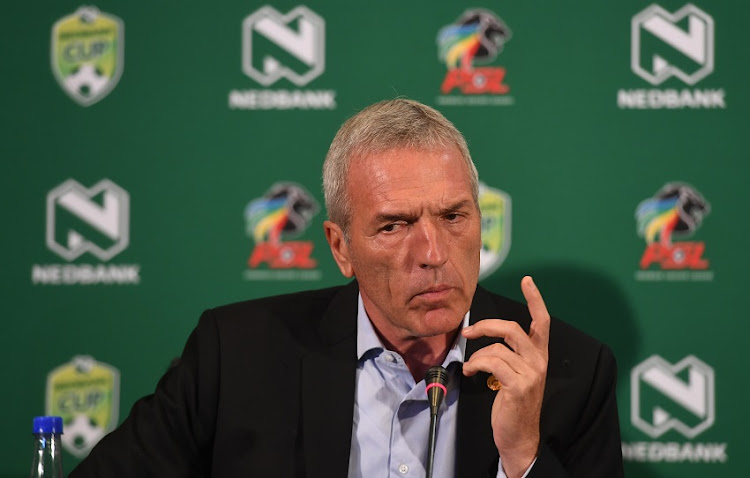 To listen to Kaizer Chiefs coach Ernst Middendorp you would think coaching football was similar to programming a computer.

It has been a criticism of Middendorp that his teams’ football can be mechanical.

But one thing you cannot accuse the often prickly – at times aloof‚ to the point of coming across as arrogant – coach of‚ is not knowing his stuff (for lack of a better word).

Middendorp displayed this week that he knows his stuff on Cape Town City‚ Chiefs’ opponents on Sunday afternoon in a Nedbank Cup quarterfinal at Mbombela Stadium in Nelspruit (kickoff 3pm).

For Middendorp‚ this is a big game.

The coach has not had enough time to be judged since his arrival in December to replace the muddled Giovanni Solinas – the Fawlty Towers scriptwriters might have had a field day at the dynamics of a German arriving to clean up the mess of an Italian – on his performance.

Nor will he have had even by the end of the season in a month-and-a-half’s time.

So poor were the Chiefs he inherited that the notable tightening Middendorp has managed in a short space will be seen as a sufficient indicator that more can be achieved in the coming season.

Cape Town City captain Thamsanqa Mkhize says he is ready for the challenge of facing up to Khama Billiat when his side take on Kaizer Chiefs in the ...
Sport
3 years ago

But a semifinal‚ seeing off Benni McCarthy’s MTN8 champions City along the way‚ would really tee Middendorp up for 2019-20 – a final more so‚ and a trophy even more.

Most pundits might predict a tight Chiefs – though also with a sharp attack – against an expansive‚ adventurous City‚ given the way the teams have played.

Middendorp‚ though‚ has been known to spring surprises in selections‚ approaches and formations.

“I found it quite interesting again and again that people are talking about‚ ‘It’s difficult to play Kaizer Chiefs because they always come with a new approach’‚” the coach said.

“And with a new approach I’m not talking about formation. Most people‚ even coaches‚ cannot tell you the difference between a formation and a system.

“The system is just the dynamic. You have a setup [formation]‚ and now talk about what are you expecting from your fullbacks‚ your wingbacks? More defensive‚ more attacking?

“[People seem to think] you have players who are all attacking and others all defenders. Please guys.

“One parameter for everybody who has to be identified here is goal-scoring. If you sign a defender‚ ask‚ is he helpful in terms of goal-scoring?

“For a midfielder – how far can he be used in terms of attacking? Is he dangerous? Does he score goals?

“At the same time‚ how does a particular striker work in his defensive work? Can he close passing lines?

“Back to Cape Town City‚ they have a similar – and I’m very happy to hear this – setup‚ where it’s not a one-man show.

“It’s not here [at Chiefs]‚ where we have a fantastic coaching staff with Shaun Bartlett‚ with TV analytics with Mark Davy.

“The technical team here are very qualified. And they are also at City‚ with Rayaan Jacobs‚ the assistant-coach‚ and so on.

“They are very detailed‚ like we are here at Chiefs. We know the passing combinations.

“I can tell you exactly the numbers of passes from the goalkeepers to the centrebacks‚ and in which direction – it’s 14 and 15.

“And that tells you we are busy in the details and know these exactly. And I can tell you they are doing exactly the same.”

Middendorp seems confident he will have the right software installed to have his Chiefs computer probing at City’s weaknesses.

And don’t rule out a surprise malware virus or two thrown in too.