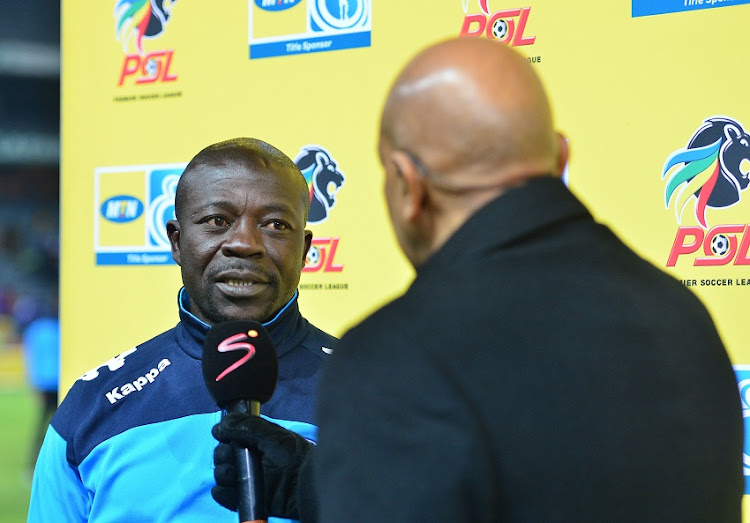 For the former combative Zimbabwean international defender‚ this is his maiden senior trophy of his coaching career after he narrowly lost on penalties to Benni McCarthy’s Cape Town City in the same tournament last year.
Image: ©Samuel Shivambu/BackpagePix

Kaitano Tembo not only dedicated winning the MTN8 trophy to his grief-stricken striker Thamsanqa Gabuza‚ but to all the coaches he’s worked with and learned the ropes from before he was appointed as head coach of SuperSport United.

For the former combative Zimbabwean international defender‚ this is his maiden senior trophy of his coaching career after he narrowly lost on penalties to Benni McCarthy’s Cape Town City in the same tournament last year.

SuperSport beat Highlands Park 1-0 at the Orlando Stadium on Saturday in what was the club’s third successive top eight final appearance‚ having also won it in 2017 with Eric Tinkler‚ who was assisted by Tembo‚ at the helm.

The top eight trophy was third that SuperSport have won since they were formed in 1994 and it is the seventh piece of silverware they’ve collected in eleven finals they’ve contested in recent years in the PSL era.

Tembo‚ who rose from the lower structures at SuperSport to eventually assume the head coach role‚ mentioned three former Bafana Bafana coaches: Pitso Mosimane‚ Gordon Igesund‚ Stuart Baxter and Bidvest Wits mentor Gavin Hunt‚ as some of those who have played a vital role in both his playing and coaching career.

“I’ve worked with a lot of coaches‚” said the 49-year-old Tembo after Bradley Grobler’s header on the stroke of half-time gave his team victory.

SuperSport United coach Kaitano Tembo is determined to win the MTN8 trophy on Saturday and put the spotlight on underrated coaches and players in ...
Sport
2 years ago

“I believe in having mentors who I can pick a call and say I’m going to call you. Now I can even call Stuart at any time. I can call him when I need help on 1‚ 2‚ 3 on how do I deal with situations. He’s always there to help me because he’s been there‚ he’s seen it.

Touching on how they won the match against a Highlands Park side that attacked them from the first whistle‚ Tembo admitted they didn’t have a good start but that didn’t matter because they managed to strike at the right time. “Ronwen (Williams‚ the goalkeeper) kept us in the game. They could have scored early. One on one with the goalkeeper and Ronwen‚ I think that’s why he’s Bafana Bafana’s number one‚” said Tembo.

“So we needed to apply a little bit of surprise in terms of our movement. I think the moment we did that we scored the goal where Tebza (Teboho Mokoena) just went through the channel and put in a cross and we score from that. I think we scored at the right time. That really shocked them.”

“We nullified their treat which is a long throw and again Gabuza played a huge role there because we put him on (Mthobi) Mvala because Mvala scores most of his goals with his head‚” said Tembo.

Highlands Park coach Owen da Gama opted to place the experienced Reneilwe Letsholonyane on the bench against his former club SuperSport United in the ...
Sport
2 years ago

Will 'Yeye' start for Highlands against former side SuperSport in the final?

Highlands Park coach Owen da Gama has kept his cards close to his chest in the build up to Saturday's MTN8 final against SuperSport United and has ...
Sport
2 years ago