Ali Meza on targets as Sundowns scrape past AmaZulu at Loftus 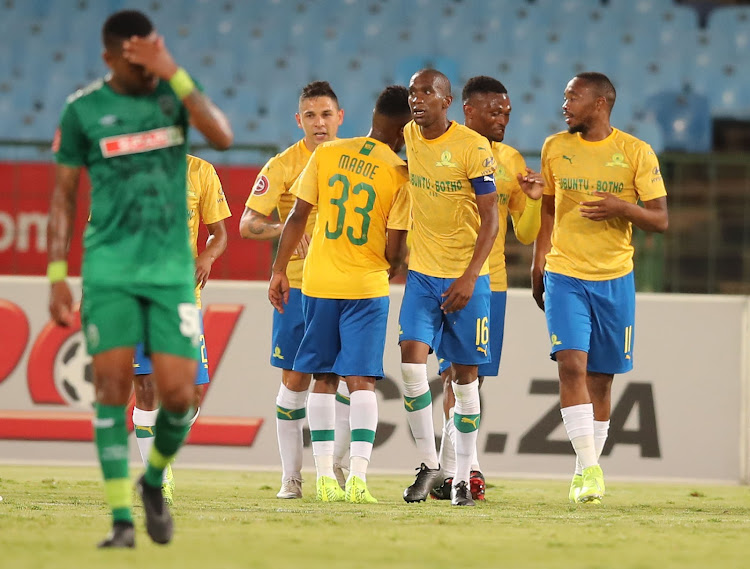 Ali Meza celebrates with teammates after scoring the only goal of the match.
Image: Samuel Shivambu/BackpagePix

Mamelodi Sundowns were made to sweat for their narrow but important 1-0 Absa Premiership win over AmaZulu at Loftus Versfeld on Tuesday night.

The all-important goal on the night was scored by striker Ali Meza deep into injury time of the first half after he was set up by midfielder Sibusiso Vilakazi who received a long pass from Andile Jali.

With this victory, the Brazilians have narrowed the gap to seven points on runaway log leaders Kaizer Chiefs who take on Stellenbosch FC at the Cape Town Stadium on Wednesday.

Sundowns remain in second spot on 21 points on the standings while Chiefs lead the pack on 28 with both teams having played eleven matches, although Downs will have their game in hand back after the Chiefs-Stellenbosch encounter.

For struggling AmaZulu, they remain rooted second from the bottom with eleven points from twelve matches and they face a mountain to climb to get their campaign back on track.

With three home points successfully negotiated, the Brazilians shift their attention to Caf Champions League, group stages where they host Angolan side Petro de Luanda on Saturday at Loftus.

It will be the start of a busy three weeks for Pitso Mosimane and his men because after hosting De Luanda, they travel to North Africa to face rivals Wydad Casablanca in Morocco on December 7 in the second match of the group.

When they return from Morocco, Sundowns are scheduled to travel to Cape Town Stadium to take on Stellenbosch on December 11 and they have the Telkom Knockout final against Maritzburg United at Moses Mabhida Stadium three days later.

During the early exchanges, Sundowns were the dominant side with Jali, Rivaldo Coetzee, Vilakazi, Siphelele Mkhulise and Meza threatening AmaZulu.

The visitors also had their moments on the attack through their target man Bonginkosi Ntuli, Sphesihle Maduna and Samuel Darpoh but they did not trouble Sundowns goalkeeper Kennedy Mweene.

The game was paused for five minutes from the 28th minute when Sundowns defender Motjeka Madisha elbowed AmaZulu ‘keeper Siyabonga Mbatha who was replaced by Niel Boshoff at half time.

The first half continued with both teams testing each other and the next notable chance fell for Mkhulise who dribbled his way past the AmaZulu defence but his effort was cleared by Phumlani Gumede.

Sundowns launched another attack just before the break but Meza’s goal bound shot, after he was released by Jali’s defence splitting pass, was saved by the alert Mbatha.

After a number of wasted chances, Sundowns finally opened the scoring deep into referees’ optional time when Meza put the ball into an open net after he was set free by Vilakazi.

On the hour mark, another Sundowns attack resulted in Meza forcing a stunning diving save out of Boshoff as the Brazilians looked for the insurance goal.

In the closing stages, AmaZulu attacked the Sundowns defence but they could not find the goal that could have earned them a vital away point from the defending champions.

There were many heroes on the pitch for Maritzburg United in their 2-1 Telkom Knockout semifinal victory over Kaizer Chiefs at the Mbombela Stadium‚ ...
Sport
1 year ago