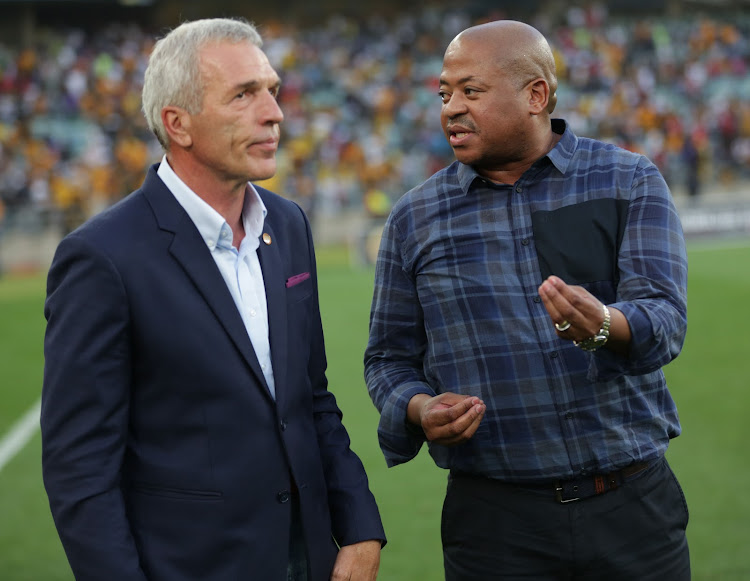 Ernst Middendorp might not have worked with many of Maritzburg United’s current players but says he has kept close tabs on matters at his old club‚ who Kaizer Chiefs meet in Sunday’s Telkom Knockout semifinal at Mbombela Stadium.

Middendorp can become only the second Chiefs coach following Muhsin Ertugral to have reached all three South African cup finals in the Premier Soccer League era if his team prevail on Sunday (kickoff 3pm).

But the coach has stressed the need to take the team he worked at in two stints in the KwaZulu-Natal capital of Pietermaritzburg‚ and where Middendorp played a role setting up better youth structures at United‚ seriously.

Maritzburg are a tenacious‚ tight unit under coach Eric Tinkler‚ and have gone seven league and cup games unbeaten.

“It’s just two or three players of their regular 13 [who Middendorp has worked with]. The rest are new‚” Chiefs’ coach said.

“But of course‚ as I’m always saying‚ if you have been with a team you follow them more closely than other teams.

“I have seen a lot of their games at the beginning of the season having a bit of a stuttering start.

"But the later games‚ especially now‚ they have been successful‚ producing the results‚ getting to where they want to be in the league‚ and into a semifinal. That tells you a story.

“They are doing well at home – and everybody knows that when they play in Maritzburg there is a certain vibe.

“But they played Orlando Pirates with success [in Orlando]‚ they have had good performances away.

“And‚ ja‚ I think actually the options are there despite [centrebacks] Siyanda Xulu [injured] and Kwanda Mngonyama [suspended] not being available for them.

"It doesn’t matter if we play Pirates‚ Sundowns‚ Black Leopards‚ or now Maritzburg – we will not take them lightly.”

Middendorp‚ in his previous stint as Chiefs’ coach‚ reached two cup finals and won both.

South Africa Under-23 coach David Notoane has called on the South Africa Football Association (Safa) and the Premier Soccer League (PSL) to hatch a ...
Sport
2 years ago

Sundowns' Patrice Motsepe expands his empire into the Blue Bulls

Patrice Motsepe is not only one of the richest men in South Africa‚ but also has a say in how two of the most successful sporting entities based in ...
Sport
2 years ago

Maritzburg United have a big task in overcoming a Kaizer Chiefs outfit that's been brutal in their seven-match winning run ahead of today's Telkom ...
Sport
2 years ago