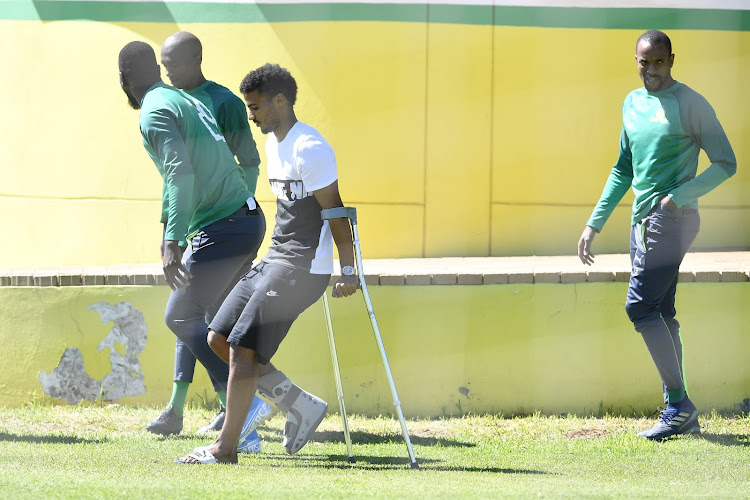 Rivaldo Coetzee on crutches at a Mamelodi Sundowns training session at their Chloorkop headquarters on Thursday.
Image: Lefty Shivambu/Gallo Images

The season of Mamelodi Sundowns utility player Rivaldo Coetzee may be over.

Coetzee, who operates as a central defender or in the heart of the midfield, was carried off the field in a stretcher during the second half with what looked like a serious ankle injury during the 3-1 win over Stellenbosch FC on Wednesday.

He was on the receiving end of a senseless tackle by Stellenbosch captain Mogamad de Goete after 71 minutes, and Coetzee was seen using crutches on Thursday morning. De Goete was red-carded.

“He is on crutches – I wonder if the guy has apologised because it was career-threatening tackle,” Sundowns coach Pitso Mosimane said.

“I saw it on TV and he was never worried about the ball but went for the ankle and it is unacceptable. If my player does that I will say the same because it is unsporting behaviour.

“What I know is that when you have a swollen ankle, you can’t take it for a scan. I think there is about a 48-hour period where the swelling must go down and then the scan can be able to penetrate.”

“It looks like he [Coetzee] hasn’t broken an ankle but it is really bruised. We will hear from the doctors but the ankle is swollen and it is a bit sad. His ankle nearly broke and finished his career,” said Mosimane with a serious face.

His ankle nearly broke and finished his career

“Probably De Goete will find time to apologise for what he has done because you can’t end someone’s career like that. They kicked us to pieces in the first half and I could see a red card coming – I was not surprised to see the red card.”

Though Mosimane is certain to be without Coetzee for the Telkom Knockout final against Maritzburg United on Saturday in Durban, he welcomes back Denis Onyango, Thapelo Morena, Tebogo Langerman, Hlompho Kekana and Andile Jali.

Also making a comeback is influential creative midfielder Gaston Sirino, who served the last match of his suspension on Wednesday, and Mosimane will be happy that Themba Zwane lasted the entire 90 minutes against Stellenbosch.

This was Zwane’s second competitive match since he returned from a long injury lay-off.

The win over Stellenbosch was inspired by academy graduates Sphelele Mkhulise and Kgeletso Makgalwa, who scored in the closing stages, and they impressed Mosimane.

“Sometimes we don’t make too much noise about our MDC [reserve team] boys but now we can say something about our players who come from the academy,” Mosimane said.

“They came and changed the game. I played Mkhulise as a No 8 and I thought he will stay there, but there he goes to No 10 and scores the goal. They did well and will have a chance to play in the final on Saturday.”

Mamelodi Sundowns showed character to come back from a goal down to beat stubborn Stellenbosch FC 3-1 during their Absa Premiership encounter at ...
Sport
2 years ago

Pitso Mosimane is confident of securing an overseas transfer for Rivaldo Coetzee but the Mamelodi Sundowns coach says the move has a greater chance ...
Sport
3 years ago