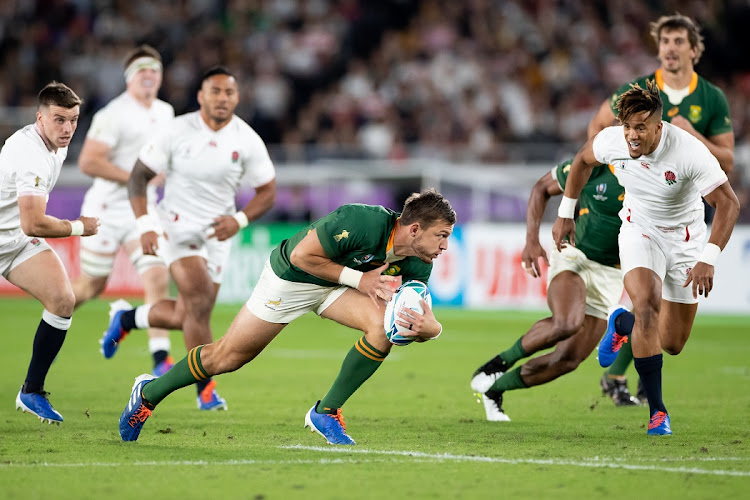 In Part 2 of our insightful conversation with Rassie Erasmus's lieutenant, performance analyst Lindsay Weyer, our last special guest for 2019 breaks down how the Springboks dismantled England in the Rugby World Cup final.

LISTEN TO THE BRAINS BEHIND THE WIN:

They had plenty of help, of course, coming in the form of consultant Felix Jones, who joined the Springbok management team after Swys de Bruin pulled out on the eve of the tournament.

Many questioned Jones' appointment, but Erasmus knew what they were getting from his mate from Munster and Weyer gets into detail about how Jones gave them the blueprint on all the England players. This influenced the power scrum that SA had as well as the key moments, such as the Cheslin Kolbe try and Damian de Allende's running lines.

Weyer describes how they identified that the two England playmakers, George Ford and Owen Farrell, were actually poor defenders. The coaching staff commanded their ball-carriers to have a go at them. The result was spectacular.

Weyer also goes into detail about his history in the game, which is a great “origin” story of one of the most influential hidden figures of the Rugby World Cup-winning team.

SportsLIVE is a MultimediaLIVE production

There’s trouble in paradise, if reports are to be believed, at Mamelodi Sundowns, with an alleged rift between head coach Pitso Mosimane and Alex ...
Sport
2 years ago

SportsLIVE PODCAST | Henry Olonga: 'I had no pleasure when Mugabe died'

SportsLIVE speaks to former Zimbabwean international cricketer Henry Olonga about his life in exile after he took on Robert Mugabe's regime in 2003.
Sport
1 year ago

Banyana Banyana head coach Desiree Ellis paid a special visit to the SportsLIVE podcast to detail the whimsical year 2019 has been for the SA ...
Sport
2 years ago