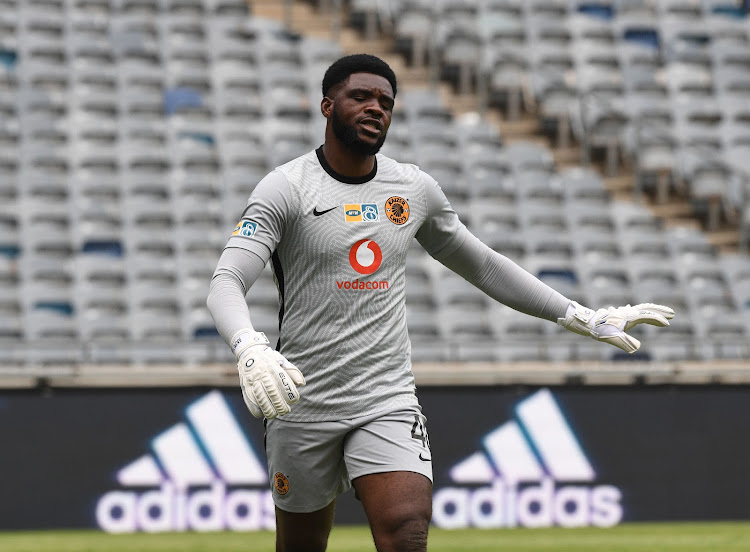 Nigerian goalkeeper Daniel Akpeyi says the team has learnt from its mistakes made in the previous matches.
Image: Sydney Mahlangu/BackpagePix

Fresh from a MTN8 encounter where Orlando Pirates consummately defeated them‚ Kaizer Chiefs have to navigate past what could be a potential banana skin in TS Galaxy on Wednesday.

It may be the first league meeting between the sides‚ but their 2019 Nedbank Cup final date remains one of the great shocks in South African football.

Zakhele Lepasa‚ who scored the first of three goals for Pirates on Saturday‚ scored the winning penalty for Galaxy in that particular game.

A lot has changed for both teams as Galaxy have bought their way into the top-flight while Chiefs were subjected to last-minute heartbreak when Mamelodi Sundowns snatched the league from right under their noses last season.

Chiefs’ Nigerian international goalkeeper Daniel Akpeyi admitted that history may be against them‚ but they’ve got the present to change their narrative for the better.

“They may still have that momentum‚ but sometimes‚ football isn’t about history‚ and it’s about the present.

"I’m very sure that they’re going to be well prepared for us‚ especially with what took place on the weekend.

"We’ve learnt from our mistakes and we’ll come out stronger for them‚” Akpeyi said.

While Chiefs may still be smarting from the Pirates defeat and the decision by the Court of Arbitration for Sport to dismiss the club's appeal against Fifa's two-window transfer ban‚ they still looked too good for Chippa United in their last league outing.

Galaxy have yet to drop a game‚ having beaten AmaZulu in their last outing while drawing against Tshakuma Tsha Madzhivandila in their opening game.

Akpeyi‚ who wasn’t at fault for the deluge of goals he conceded on Saturday‚ said they need to be better on Wednesday.

“We put ourselves on the back foot. We’ve realised where we are going wrong and we’re trying to work on that.

"We know we need to put everything that we have into the next game to make up for the loss against Orlando Pirates. The earlier we get our points‚ the better it will be for us‚” Akpeyi said.

“Every game matters and it’s not just about the league because cup games are also important. It’s important that we do better in each game as compared to the previous game.

"That wasn’t the case in the Pirates game‚ but we hope that we come out a lot better when we play TS Galaxy.”

Mamelodi Sundowns co-coach Manqoba Mngqithi has explained why exciting and attacking midfielder Lesedi Kapinga is not yet ready for competitive ...
Sport
1 year ago